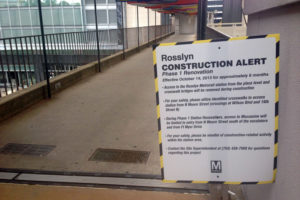 The escalator from the Rosslyn Metro Station to the pedestrian skybridges will close Monday night for a six month renovation project.

The north entrance to the station — the side that includes the skybridge escalator — will also be closed while WMATA starts Phase 1 of its renovation of the Rosslyn station.

“The bridges themselves are going to stay open, but the access to the escalator will be closed off,” said WMATA’s site supervisor, who declined to give his name.

One alternate way to reach the skybridges is via a staircase between N. Moore and Lynn Street, next to the new Rosslyn Metro elevator entrance. 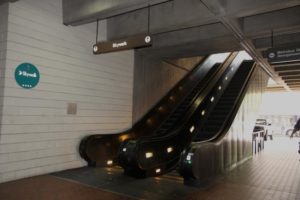 The renovations are expected to take until April to complete. During that time the two up-and-down escalators will be replaced with staircase. Also, a connection to the new skyscraper next door, 1812 N. Moore Street, will be built, the official said.

The escalator removal is taking place despite earlier objections from the North Rosslyn Civic Association, which called the escalators “the only assistance provided to residents in negotiating the tremendous change in elevation between the center of Rosslyn and the adjacent community to the West.”

The removal of the escalators is necessary to make way for a new Arlington Commuter Store.

After Phase 1 is finished, the north side of the station will reopen and the south side will close for construction, the supervisor said. Phase 3 will be renovations to the N. Ft. Myer Drive entrance.

This weekend, the sidewalk that runs along the 1812 N. Moore project, north of the station, will reopen, and the temporary pedestrian walkway that juts into the street will close.

Read more →
More Stories
The Right Note: What Else is on the Ballot?Crime Report: Man Accused of Sexually Assaulting Roommate