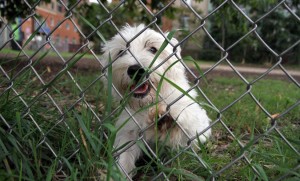 Dog owners must now adhere to new tethering regulations passed by the County Board on Saturday (October 19).

The Board voted unanimously to adopt changes to the Arlington County Code which went into effect immediately on Saturday. Previously, the Animals and Fowl ordinance did not specifically address dog tethering.

Under the new regulations, dog owners cannot leave their pet tethered unattended for more than three hours in a 24 hour time period. Dogs tied to running cables or trolley systems with access to water and shelter can be tethered for up to 12 hours in a 24 hour period. As previously reported, the rules only apply to dogs that are not within physical reach of their owners.

Regarding the running cables or trolley systems, the regulations state:

The county staff report on the issue states that the regulations were suggested because tethering an animal for extended periods of time can put the animal’s life at risk.

“The Board’s action today is meant to protect dogs from abuse,” said Arlington County Board Chairman Walter Tejada. “Tethering can put dogs at risk if the tethered animal is unable to get to food, water or shelter. Dogs can also become aggressive if tethered too long. Animal control officers have long made it a practice to respond to reports of dogs being tethered for hours on end. The new rules help responsible dog owners by providing clarity on what’s acceptable and what isn’t.”

The ordinance amendment reads, in part:

“It shall be unlawful for any person to tether a dog to a chain, rope or line of any kind that is too short to enable the dog easily to stand, sit, lie down, turn about, and make all other normal body movements in a comfortable, normal position for the animal, and reach shade as necessary… When the same dog is observed to be tethered in the same location that it was in after an initial observation of the dog in that location, then there shall be a rebuttable presumption that the dog has been continuously tethered in that location since the initial observation.”

The staff report indicates the Animal Welfare League of Arlington supports the new rules. Animal control officers have already responded to resident complaints of dogs being tethered for too long, according to the report.

Violations are considered a misdemeanor and come with a fine of up to $100. Residents who wish to report a violation of the dog tethering rules are asked to call the Animal Welfare League of Arlington at 703-931-9241.