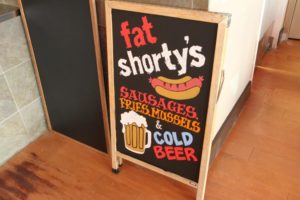 Less than 7 months after opening, Fatshorty’s in Clarendon is set to close.

The restaurant, which specializes in sausages, mussels, beer and cupcakes, will close on Sunday, Oct. 27, according to an email sent to Groupon customers who previously purchased a coupon for Fatshorty’s.

The restaurant was a collaboration between local restaurateur Aaron Gordon (of Red Velvet Cupcakery and other restaurant concepts) and Hell’s Kitchen winner Rahman “Rock” Harper. It opened in April.

“Yes, we are closing,” Gordon confirmed to ARLnow.com this morning. “Our reasoning is that we were not making enough revenue and are being bought by another restaurant group.”

Additional details were not immediately available.

Fatshorty’s offered a “sausage blow out” this past weekend, offering half-off all sausage sandwiches, according to a Facebook post.