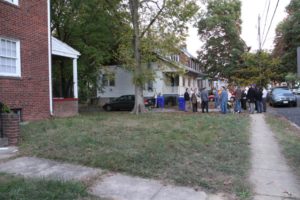 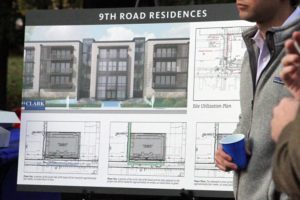 Three houses are being torn down to make way for a new apartment building in the Lyon Park neighborhood.

Developer Clark Realty expects to begin demolition on the vacant houses, on 9th Road N. behind Jay’s Saloon, within the next week. Construction on the new building, which will feature 18 one-to-three bedroom apartments and 33 parking spaces, is expected to take about a year.

The building, dubbed 9th Road Residences, is being built “by right,” meaning County Board approval is not needed. The new structure will be adjacent to another Clark-built apartment building on 9th Road. Both are about the same in scale: 3 stories high with a half-sunken ground floor.

Clark is planning to rent the apartments, but they’re being built with “condo-level finishes” so that the building can be converted to condominiums if market conditions dictate.

The project is adjacent to but separate from Clark’s “10th Street Flats” development, which will eventually result in the closure and demolition of Jay’s Saloon (3114 10th Street N.) and several other small businesses. That development must first go through Arlington’s site plan process.

At an informal neighborhood meeting with the developer last night, Lyon Park residents expressed little objection to the 9th Road project, but raised some concern about traffic that might eventually come from 10th Street Flats.