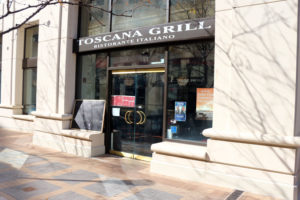 Toscana Grill is under new management, resulting in some confusion as to whether the restaurant is actually open.

The Italian restaurant’s website, SpaghettiYaFace.com, was recently updated to say the restaurant was closed for good. However, that site was maintained by Joe Smith, who was managing the restaurant the last two years.

Smith could not be reached via email, but the Spaghetti Ya Face Facebook page announced Oct. 20 that the restaurant shut down. In a reply to a customer comment, Smith or someone else managing the page wrote about the closure: “tried to plan it for November but [the] owner strong armed us.”

Mughal said Smith did not renew his contract because Smith was starting another restaurant in a new city.

Toscana had to close for more than a month earlier this year after a burst pipe covered the restaurant’s floor with three inches of water. It reopened in late June.