Editor’s Note: This sponsored health and fitness column is written by Virginia Wright, founder of BbG Fitness, which offers group fitness classes around Arlington. Sign up for a free class today.

Let’s face it — practicing healthful behavior can seem like a chore sometimes. 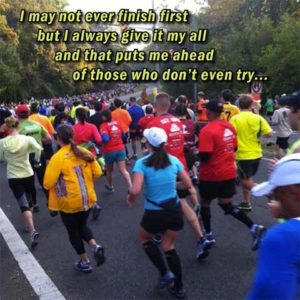 So how do we find the motivation to stick with our plan or even more challenging, start a new exercise program? And how do we keep making healthy choices even though sometimes we’d rather stop for take-out or heat up a frozen dinner?

Here’s an example of one person who found that motivation.

A few months ago at one of our early morning classes I looked across the parking lot to see a very big guy, Evan, walking towards me. Evan explained that he was there to try the class because he was ready to make some changes. He said he was really disappointed in himself for having gained so much weight over the years and he was tired of being out of shape.

Since his first class seven weeks ago, Evan has made it to every single workout. When his schedule doesn’t permit him to attend an early class, he comes in the evening. At first he wanted to focus on exercising, but after about a month he decided to set a weight loss goal. too. His goal is to get down to 300 pounds. He’s lost five pounds so far and is right on target!

When Evan’s going to a big game or has a big party coming up and warns me he might not “do too well,” I tell him there’s always going to be a game and a celebration — that’s part of normal life. We can’t use those as excuses for caving and not doing what we know we should to take care of ourselves. Sure, an occasional splurge is okay, even healthy, but this is not what packs on extra pounds!

When I asked him recently what motivates him, Evan told me his parents were both sedentary, overweight and don’t eat healthfully. He said he didn’t want to end up in the same situation as he grows older. The good news is not only is Evan exercising regularly now, his parents have jumped on the bandwagon and have started walking every day!

Evan is also motivated to continue eating better — he hasn’t had any soda or ice cream in almost two months! — because he wants to feel good again when he plays basketball. He also wants to ensure that he can continue to run around and play with his nieces without feeling tired. A few weeks ago Evan completed his first 5K race and proudly reported that he ran the whole way!

It’s all about making the decision to make the changes. Start by making a list of all the reasons you want to get healthy. Maybe you just want to feel better every day or have more energy. Maybe your motivation is you want to live a long life. Maybe you don’t like the way you look. Someone once told me she was motivated to exercise because she wanted to be able to walk in a clothing store and wear anything she wanted!

Whatever your reason, whatever your motivation, write it down, stick it on the fridge or on your bathroom mirror, make a mental image of it and remember it every time you feel your resolve weakening. Setting these clear, sensible long-term goals are the best way to stick to your program and stay firmly on the road to success — and to a fitter and healthier you!

Ginny Wright has been a certified personal trainer and fitness instructor for more than 10 years. She received her Health Coaching certification through the Institute for Integrative Nutrition in New York in 2007. The views and opinions expressed in the column are those of the author and do not necessarily reflect the views of ARLnow.com.