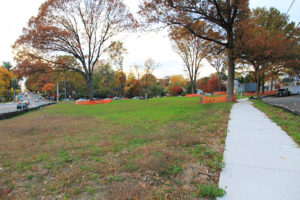 (Updated at 5:05 p.m. on 11/12/13) Nearly 10 months ago, workers excavated land at the corner of Washington Blvd and N. George Mason Drive to make way for a new subdivision called Lacey Lane. Shortly after the land was readied, however, the project stalled out and currently appears to be little more than a vacant lot.

In February, brothers Taylor and Milton Chamberlin of The Barrett Companies said they expected work to begin on the first model home at the site in March, with work on the second beginning shortly thereafter. They anticipated the two models would take about seven months each to build and would be ready by autumn. So far, no housing construction is visible at the site.

The land is divided into nine properties. Each plot will have a house with a base price of $1.4 million.

Calls and emails to Milton Chamberlin over the past few weeks were not returned. But Arlington County’s Department of Community Planning, Housing and Development (CPHD) explained where things stand from the county’s point of view.

According to CPHD, there has not been any trouble with The Barrett Companies, the delay revolves around fulfilling safety regulations in order to get a building permit. County staff found outstanding “life safety regulations” that the developer needs to fulfill before a building permit can be granted. Once the developer makes some clarifications and revisions to the permit documents, the permit can be approved.

“To say it plainly, life safety is really about making sure the buildings are safe for people to occupy,” said CPHD spokeswoman Helen Duong. “For this project, the outstanding items on this permit have more to do with the documentation of the design than concerns about the adequacy of the design itself.”

Basically, it appears the designer believed certain safety features were implied in the building plans, but they need to be explicitly included. Revisions must continue until county staff can see all the necessary safety features drawn in.

According to the CPHD permit records, The Barrett Companies first applied for a Lacey Lane building permit in January, but the plans were sent back for revision in February. This process was repeated a few times in the following months, and CPHD’s Inspection Services last rejected a version of the plan in April. No further revisions have been submitted since then.

Permit applications stay active for six months but expire if no action has been taken after that time. The current permit application for Lacey Lane has an expiration date of March 15, 2014. That date can move back another six months, however, if further actions occur, such as submitting another round of revisions.

Once CPHD Inspection Services staff approves the plan’s revisions, the developer must also get the permit approved by the Department of Environmental Services. We’re told that process typically takes place in just a few minutes.