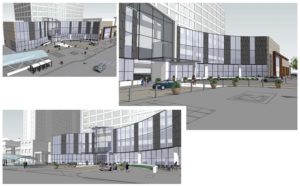 The Arlington County Board unanimously approved the Fashion Centre at Pentagon City’s request to expand and offer outdoor restaurant seating at its meeting on Saturday.

The mall, owned by Simon Property Group, will add 51,000 square feet along S. Hayes Street — two stories with space for 5-7 retail tenants whose entrances would be on the street.

The expansion will be built on the east façade of the mall, adjacent to the entrance to the Pentagon City Metro Station. As part of the construction, the mall is expected to make pedestrian and bicycle safety improvements along S. Hayes Street, Army Navy Drive and 15th Street.

“This expansion plan for one of the region’s most popular malls fits perfectly with the County’s goal of making Pentagon City a more lively, walkable area,” County Board Chairman Walter Tejada said in a press release. “Bringing new shops and restaurants to S. Hayes Street will be good for the mall and good for the neighborhood.”