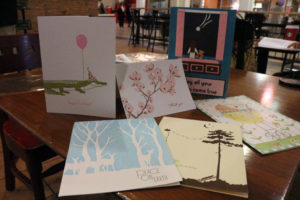 Glen Homan was “semi-retired” and spending his time trading stocks when inspiration hit him to create his own startup company.

Shopping in CVS for an anniversary card for his wife, Homan couldn’t find anything to his satisfaction and found the whole experience “unpleasant.” With some time on his hands and motivation to try something new, he launched PaperCardShop.com in December 2011 with the hope of helping people avoid the same experience.

Since the site launched, Homan said he’s “having trouble finding traction” in the market. He hopes to soon raise money from investors to launch a marketing campaign, putting his company on sites like Angel.co. Eventually, he said, he believes his site has the ability to dominate the market.

“The greeting card market is about $7.5 billion,” Homan said. Most card sellers “have chosen not to sell their cards online. We’re the only general purpose online greeting card store. That’s pretty odd.”

PaperCardShop’s key is a patent for Homan’s browsing platform, InstaView. The website displays each card’s front and inside as a user’s cursor drags over the card. Each image is of the actual hard copy of the card, photographed by Yorktown High School graduate J.P. Tribby. 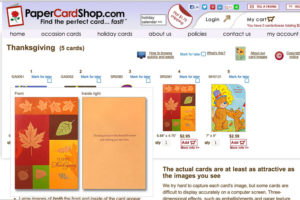 “People have been selling greeting cards the same way for 100 years,” Homan said. “With innovation, you generally think of new products like an iPhone, but there’s also innovation in product presentation. With InstaView, people could save millions of hours shopping for cards.”

Homan worked in advertising in Chicago before moving to Virginia and starting Flar Graphics, a print and poster store that once had three locations around the D.C. area. Homan sold Flar Graphics about 20 years ago, he said, and hadn’t started a new venture since.

“I was itching to do something instead of just trading stocks,” he said. “It just sort of bothered me that such an inefficient market existed for greeting cards.”

In 2010, he made the decision to try to solve the online card market. He set about looking for web developers, which is what he called the hardest part of the process. Developers “are kind of like prima donnas,” he said, and many of them weren’t open to changes he suggested. 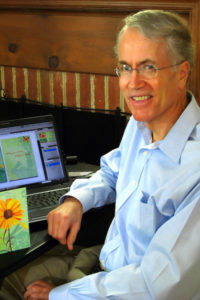 While he was looking for developers, he was contacting artists across the country, buying cards for the site. Homan said he “cherry picks” the best cards from independent publishers, trying to find a wide range and variety. He relied on his own judgment for many of the cards, but was sure to ask the artists which ones sold best, and ask friends and family members their thoughts.

He eventually found a web developer, with whom he created the InstaView system. Homan works largely out of his home and has piles of boxes of greeting cards in his basement, which he ships himself.

Because the greeting card business has low overhead, Homan said he “can hang on indefinitely” until traffic on the website — and with it, sales — picks up.

“It’s an untapped e-commerce opportunity,” he said. “It’s one of the most profitable e-commerce niches, and there’s no competition. The challenge is to change consumer buying behavior in a low-involvement product.”

If Homan can get enough people to think about buying greeting cards online, instead of sifting through the racks in stores, he thinks PaperCardShop can “become the dominant player in the market.”

“We have a great proposition for consumers,” he said. “The market needs to move online. Eventually, that’s the way the market is going to go, it’s just a question of when.”