The holiday season brings with it endless catalogs and gift guides, but my favorite has always been the Neiman Marcus Christmas Book.

Yes, the Christmas Book’s ‘fantasy gift’ selections are the apex of one-percenter tone deafness, but they go just so far beyond the pale that the catalog seems to be self-aware; a parody of itself. From special edition supercars to multi-million dollar entertainment systems to (I swear I’m not making this up) the “Bespoke Global Falconry Companion” — yours for only $150,000, by the by — the Neiman Marcus Christmas book never fails to entertain me.

In that spirit, I’ve found a list of some of the more absurdly priced beer gifts to give this year, with the biggest difference between my list and the Neiman Marcus one being that I’d actually want pretty much all of these:

Own a piece of BrewDog: When I was first introduced to Scotland’s BrewDog a few years ago, I thought one of the coolest aspects of the brewery was that you could invest in the brewery. BrewDog’s “Equity for Punks” program is an open call for craft beer fans to buy shares of the legendarily rebellious brewery; ‘of the beer geeks, by the beer geeks’ if you will. At 95 pounds (approximately $155) each, the shares of BrewDog can add up quickly, but ownership has its privilege — bragging rights, mostly, but “Hey, I’m a partial owner of BrewDog” is a pretty decent brag.

Sam Adams Utopias: 2013 sees another release of Utopias, the super high-gravity brew from Sam Adams. Made in extremely limited amounts with a blend of barrel-aged beers up to 19 years old, Utopias tips the scales at 28% ABV and drinks more like a rich port or brandy than it does any traditional beer. Utopias are very difficult to come by, and if you do find a bottle at retail expect to pay upwards of $200 per (admittedly very cool) copper brew kettle-shaped bottle. 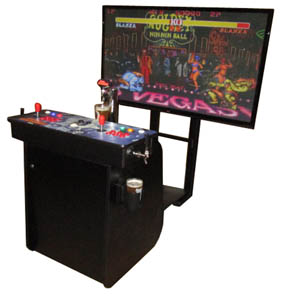 The Bruery Reserve Society: This is one I’ve personally wanted to do for years. Southern California’s The Bruery is one of my favorite craft breweries out there; their combination of fearless stylistic exploration and obvious skill as brewers produces some of the most interesting and exciting beers available today. Not all of The Bruery’s beers are readily available, however, and that’s where the Reserve Society comes in. For $295, you can sign up to receive bottles of The Bruery’s limited-run offerings, provided that you can get to Placentia, California to pick them up or have a friend who lives nearby who can pick them up for you.

The Dreamcade Kegerator 60: It is perhaps the greatest invention in recent history. Dream Arcades has built a custom arcade cabinet that features a 60-inch screen, potentially unlimited numbers of games, and a built-in fridge so you can load up kegs for the three taps attached to it. There are even cup holders built onto the sides of the machine for convenience during multi-hour Street Fighter II sessions (which comes with the Dreamcade Kegerator 60, by the way). Even if I could justify the reported $5,000 price tag — which I can’t, not in a million years — I don’t think I could excuse the sheer space the Kegerator 60 would take up in my house, but I still covet it. Oh my, do I covet it.

Enjoy your leftover food and beverage this weekend, everyone. Until next time.