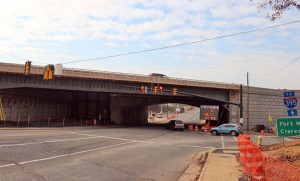 Northbound traffic on Washington Blvd is now going over the newly-constructed overpass over Columbia Pike.

The bridge, which has been under construction since 2012, was built to replace the previous structure. The old bridge was built in the 1940s as part of the original Pentagon Roadway Network and had been in “poor condition,” according to VDOT.

Construction on the project is still expected to wrap up at some point in 2015, according to VDOT’s project website.

Lane closures will continue on Columbia Pike into 2014 while the new bridge is finished and the old bridge is demolished. Demolition is expected to happen as soon as January.