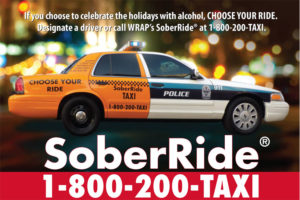 Late night partiers will be able to get a free taxi ride home from Friday night until New Year’s Day.

“Last December, nearly 2,000 (1,927) Greater Washington residents did the right thing and availed themselves of this lifesaving service rather than possibly driving home impaired,” WRAP President Kurt Gregory Erickson said in a press release. “For SoberRide’s hours of operation during just last New Year’s Eve, such ridership (387) translated into the removal of a would-be drunk driver from our shared roadways every 74 seconds.”

Customers must be 21 or older “who otherwise may have attempted to drive home after drinking” to call SoberRide, according to WRAP.