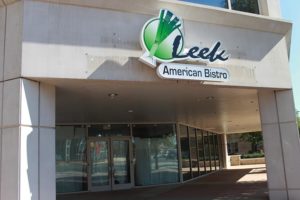 Coming on the heels of the sudden closure of Leek American Bistro last month, a new restaurant is now moving into the space. “Republic at Arlington” should open in Ballston early next year, its managers say.

Executive Chef and operating partner Alan Newton describes the concept as “modern comfort food with some international flair.” He said customers can expect high quality, made from scratch food in a casual setting.

“We want to be known as a great place for drinks and great food. There’s a lot of French influence in the food as well,” Newton said. “You can wear a suit or wear shorts, you’ll feel comfortable either way.”

Republic at Arlington is expected to serve dinner dishes priced at $20 and less, as well as lunch dishes for $10-15. The bar will feature a selection of craft beers and specialty mixed drinks. The owners have a unique idea for how to compile the drink menu — let the patrons decide.

“Since the restaurant is called Republic, we want people voting and picking out what they like,” Newton said. “We’ll either incorporate an online voting system or something when you stop in the restaurant.”

Newton is trying to make sure customers don’t draw parallels between the new restaurant and Leek. So far, the only connection appears to be the location at 801 N. Quincy Street.

“It’s going to have a totally different feel from Leek,” he said. “We’re hoping that no one will recognize the place when they walk in.”

Newton described the restaurant design as “industrial vintage with a slight touch of neoclassic twist.” Unlike Leek, he said, the new restaurant will not have tablecloths.

Currently, there’s not much to see at the restaurant — the windows are covered with paper. However, renovations are underway inside and the owners hope to open in mid-February. They expect to hold a grand opening event in the spring.

“We plan on being there as a member of the community for a long, long time — just a great neighborhood restaurant,” said Newton.