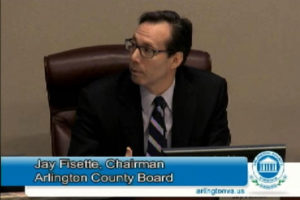 As expected, the Arlington County Board officially selected Jay Fisette as chairman for 2014 yesterday during its annual New Year’s Day meeting, and Fisette announced his priorities as, in a word: “sustainability.”

Fisette, who will serve as chairman for the fourth time since being elected to the board in 1998, made economic development, school capacity, affordable housing and the environment his top priorities for the coming year. Fisette also reiterated, along with outgoing chairman Walter Tejada and newly-elected Vice Chair Mary Hynes, his support for the Columbia Park streetcar project.

“We in Arlington have always welcomed change, carefully managed with broad community involvement and thoughtful review,” Fisette said at the beginning of his remarks. “Sound planning and adaptability are two of our civic strengths.”

Fisette laid out a six-point plan for economic development, which he said “could grow into the traditional 10-point plan by the end of the year.” The six points of his plan are accelerating the technology startup economy, particularly along the Rosslyn-Ballston corridor; strengthening business and regional partnerships; marketing Arlington nationally and internationally as a business-friendly location; updating the county’s Retail Action Plan; working to improve the county’s commissions (specifically the Planning Commission, which is viewed by developers as business un-friendly); and “be flexible where possible.”

Fisette said his plan for “aggressive business development” will include and effort “streamline processes and improve predictability” for businesses opening and operating in Arlington. He also announced a new $700,000 public-private partnership fund to help technology startups in the county. To illustrate Arlington’s flexibility, Fisette highlighted the planned redevelopments of Ballston Common Mall and the Fashion Centre at Pentagon City.

The office vacancy rate in Arlington stands at 20.3 percent, the highest it’s been in 20 years, according to the Washington Post. Fisette noted Arlington’s challenges in being competitive, particularly the BRAC closures in Crystal City. Arlington is also soon to lose other major employers, like the National Science Foundation. In addition to BRAC, Fisette blamed the vacancy rate on factors like increased competition from other localities, increased rates of teleworking and federal government caps on rent. But Fisette said he believes the county can adjust and continue to grow.

“We’ve shown resilience to a challenge that would have crippled many communities,” he said. “Arlington has amazing assets that will continue to be a fundamental part of our economic strengths. Our location is not going to change. National airport and the Pentagon are not going anywhere. And our transportation system, smart growth policies, great schools and creative class workforce will be protected and enhanced.”

The streetcar also featured prominently in Fisette’s speech, as the chairman attempted to debunk the theory that Bus Rapid Transit is a better solution and the funds for streetcar would be better spent elsewhere.

“The community planning process has been extensive and inclusive,” he said. “Such a thorough and broad-based decision-making process should not be easily disrespected or reversed.”

Fisette said the board “must do more” to meet the growing need for schools capacity, stressing Arlington Public Schools’ projection that an additional 4,000 students will enroll in the next five years and that the district needs an additional four-to-eight capital projects in the next 10 years. 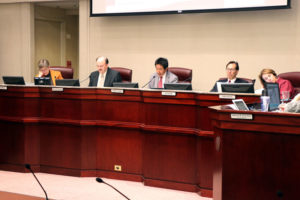 Fisette finished his speech discussing one of his favorite topics, environmental sustainability. Boasting the county’s recycling efforts and number of minimum LEED-certified buildings, he laid forth another ambitious recycling plan.

“I plan to ask this board to consider implementing a 25-year strategy to achieve zero waste,” he said. “This means diverting more than 90 percent of waste from landfill or incineration, a lofty goal that several other cities have already set.”

Hynes, during her speech, said a key priority for the board will be seeking state funding through last year’s major transportation bill — as opposed to waiting for federal funding — to fund accelerated development of the streetcar.

“Buses alone, even high-capacity buses, cannot deliver sufficient capacity to serve the 10-mile corridor, its residents and businesses over the next 30 years,” she said. “Without the additional transit capacity, motor vehicle gridlock will make this corridor much less livable, its businesses less viable, and Arlington’s economy will suffer as a result.”

Board Member Libby Garvey outlined three projects that “concern” her — Artisphere, the Long Bridge Aquatics Center and the Columbia Pike streetcar. She took the opportunity to call into question the county’s commitment to the aquatics center.

“The plans really do look beautiful, but can we afford it?” she said. “I’m not really sure, and I will be looking at that very closely this year. With the anticipated subsidy almost doubling, I think we should circle back to our community, and have perhaps a difficult, but I think very important conversation and discussion about the aquatics center.”

Also expressing dismay over the streetcar — which she believes will sway the special election to replace outgoing Board Member Chris Zimmerman this spring in favor of independent John Vihstatd — she said, “I hope we never build a streetcar.” The three projects, she said, will together cost the county $10 million a year in operating subsidies.

Tejada and Zimmerman echoed Hynes’ and Fisette’s comments about the streetcar, particularly in regards to accelerating its implementation. Tejada said he will continue to work to build more affordable housing along the lines of the under-construction Arlington Mill Residences, adjacent to the new Arlington Mill Community Center.

Zimmerman, in his final New Year’s Day speech as a member of the board before he resigns later this month, continued to discuss the projects he championed in his nearly two decades on the board.

“Today, Arlington is envied and emulated as a model, not just for what we’ve done, but for how we’ve done it,” Zimmerman said. He said Arlington has combined talent with “a can-do spirit.

“Somehow, in recent years, much of our country has been gripped with a can’t-do mentality,” he said. “We just can’t do things the way we used to be able to do. Propose anything ambitious, and a chorus of naysayers arises to shout it down across the airwaves and the Internet before there’s even a chance for thoughtful discussion.”