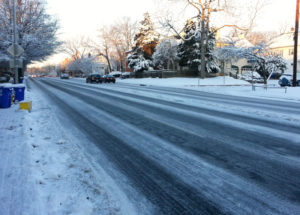 The Arlington County Office of Emergency Management reports that trees and wires came down around the county during the overnight hours. Crews are currently on the scene of a large tree and wires down in the roadway at S. 23rd Street between S. Kent Street and S. Lynn Street. The road will be closed until the obstruction is safely removed. The incident has knocked out power to more than 500 homes, according to Dominion Power.

A number of roads, including some main arteries such as Washington Blvd. (pictured above), are covered in a layer of frozen slush because of the frigid temperatures following the storm. The Department of Environmental Services reports the county’s roads were not pre-treated yesterday because the forecast called for rain, to be followed by some snow.

“If we pre-treated the streets, the salt or brine would have been washed away and ineffective. Of course, the weather changed on us and snow came earlier and the temperature dropped sooner,” said DES Spokeswoman Jennifer Heilman. “Despite the change, WSS (Water, Sewer, Streets Bureau) has had 21 trucks out spreading salt since midnight. We were able to get some trucks on the roads treating high elevations and bridges around 9 p.m. (Thursday) when the snow started earlier than expected. They have been on primary (red) and secondary (blue) streets as well as the school routes (green). Many residential streets were also treated.”

More resources about the county’s snow response and any alerts can be found on the Arlington Snow & Ice Central website.