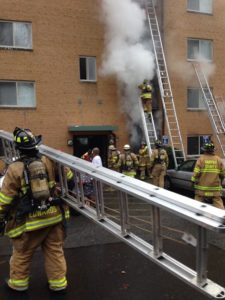 The fire broke out around 9:15 a.m. in an apartment at 850 S. Greenbrier Street. Firefighters from Arlington and Fairfax County arrived minutes after a 911 call was placed, and found heavy smoke coming from a second-floor apartment.

More than 80 fire personnel helped to extinguish the flames, which extended to the third and fourth floors and caused some $50,000 worth of damage. Arlington’s Office of Emergency Management set up a temporary shelter for 120 displaced residents in the nearby Greenbrier Baptist Church. The American Red Cross also helped to provide food, water and other essentials.

The cause is still under investigation, but the fire department says medical oxygen tanks “contribute[d] to the rapid fire spread.”