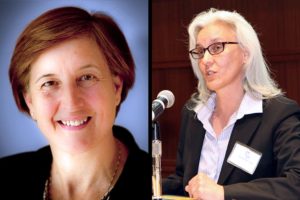 Two Arlington School Board hopefuls have formally announced their candidacy.

Barbara Kanninen, Nancy Van Doren and Greg Greeley are running for the Democratic endorsement for school board, hoping to replace the retiring Sally Baird. The endorsement caucus will be held on May 15 and 17. Kanninen and Van Doren announced their candidacies over the weekend.

Van Doren, a mother of four and an Arlington Public Schools volunteer, says her experience “is deep and broad and it is exactly what the school board needs at this time.”

From a campaign mailer:

For ten years, Nancy has volunteered extensively in Arlington Public Schools to ensure the educational success of all children from all backgrounds.

Nancy focuses on the student. She always asks: What does the student need to succeed? What can I do to ensure each and every child is successful? She maintains this focus and works for demonstrable improvement at the student, school, and county level.

Nancy follows through and gets the job done. When it comes to educating students, collaboration, good communication, and community engagement are keys to success. Nancy has a very collaborative style, which she uses effectively to build coalitions to get projects done.

Kanninen, an economist and author who unsuccessfully ran for school board last year, says the school system should improve its STEM (Science, Technology, Engineering, and Math) programs while also investing in the arts.

The press release from Kanninen’s campaign, after the jump.

Barbara Kanninen, a Ph.D. economist, children’s book author and 20-year veteran of volunteering in schools and community, has announced her candidacy for Arlington County School Board today. The seat being vacated by Sally Baird will be up for election this May.

“Arlington schools are among the best in the country, but we still have more to do,” said Kanninen. “We face the challenges of a growing student population, tight budgets, and a 21st-century economy that demands graduates who are not only proficient in technical areas, but also creative and capable of thinking critically. It’s time we have a broader conversation about how we can meet the needs of all Arlington students, and we need to put more solutions on the table. I believe that every child in every classroom should be given every opportunity to excel, and that’s what I’ll fight for from day one on the School Board. ”

Kanninen calls for strengthening STEM (Science, Technology, Engineering, and Math) programs in every school while also investing in the arts. She would also like to see a special focus on providing students with adult mentors to further support inside the classroom.

Overcrowding and the need for increased school capacity have been persistent issues in Arlington in recent years. Kanninen proposes taking a flexible and forward-looking approach to coping with the county’s growing population of school-age children. “We need to think in a coordinated way about elementary, middle, and high school capacity in the long term and be open to using all of our resources—buildings, people, and technologies— to find solutions that work for teachers, staff, and families,” she said.

Kanninen, a Ph.D. economist, runs her own data consulting firm. She has also written extensively for children, including picture books, magazine articles, and curricula and is a 20-year veteran of classroom, school, and community volunteering. Kanninen served seven years as a school coordinator and coach of Odyssey of the Mind, a creative problem-solving competition for students, and is a founding board member of the Youth Ultimate League of Arlington. A Democratic activist, she founded and chaired Arlington/Alexandria Women for Obama, a network of 600 grassroots volunteers, and was elected delegate to the 2012 Democratic National Convention. She and her husband have been Arlington residents for over 20 years and have two children attending Yorktown High School and the Arlington Career Center.

“Barbara has the enthusiasm, skills, and willingness to work hard that will make her a great School Board member. I have known her for many years, both as a fellow parent with children in Arlington schools and as a founding board member of the newly formed Youth Ultimate League of Arlington. In both roles, Barbara has impressed me with her insights, her problem-solving ability, and her commitment to youth,” said Deborah Duffy, an APS parent and president of the Youth Ultimate League of Arlington.

Aaron Rosenberg, former regional field director for Organizing for America, strongly supports Barbara, “She knows what it means to work for change. As the Arlington chair of Women for Obama, Barbara worked tirelessly to engage and empower the community. People trust and follow Barbara because they see that when something needs doing, she is the first to roll up her sleeves and get to work.”

Ed Fendley, Former Member of the Arlington County School Board, has endorsed Barbara, saying: “It’s refreshingly simple with Barbara Kanninen: her focus is on students and teachers. Barbara understands that schools are systems of people, and Arlington’s schools will be even stronger with Barbara on the Board.”