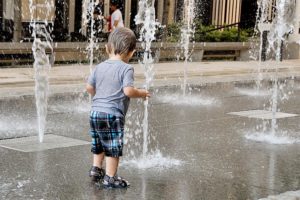 The water fountain between N. Randolph and Quincy Streets on Wilson Blvd in Ballston has been shut down and it’s unclear if it will be turned back on in time for warm weather.

Located next to Rustico restaurant in the Liberty Center development, the fountain is privately owned and operated by property owner the Shooshan Company, according to county officials.

It has been on for years and children have played in it during the summers, but the Shooshan Company voluntarily turned it off this past fall after county inspectors discovered it had never had a health and safety license.

In fact, it was only discovered to be permit-less when a county Department of Human Services inspector was driving by and noticed the fountain and realized it hadn’t been inspected.

“The fountain at Liberty Center didn’t have the right water monitoring and quality control,” DHS spokesman Kurt Larrick said. “If children have access to it, then the water quality needs to be regulated. They have to follow the same code as other water features.”

The Shooshan Company has applied for a license, Larrick said, but the county sent back their plan, asking for it to include water quality measuring and a monitoring schedule, as well as signage and a proposal for remote shut-off capability. The “ball is back in their court,” Larrick said.

Calls to the Shooshan Company were not immediately returned.

The fountain is considered “an interactive water feature” which, according to county ordinance, needs to have lifeguards and fencing, but, as is the case with a similar fountain at Penrose Square on Columbia Pike, the county can waive those requirements if they are deemed unnecessary, Larrick said.