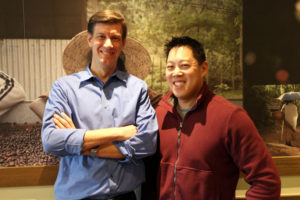 Hans Miller and Adam Tsao had a multi-million dollar deal signed with one of the world’s biggest credit card companies in 2010 that would have launched their fledgling startup into the stratosphere.

Three weeks later, the deal was dead, and it was back to the drawing board in Miller’s Arlington home on Lorcom Lane.

Such is life for startup founders trying to make an impact. Miller and Tsao are the cofounders of Airside Mobile, which develops mobile apps to make peoples’ lives easier in airports. The two worked at the Transportation Security Administration and were key members of the team that invented the mobile boarding pass before leaving the agency to start their own company in 2009.

Airside Mobile has already developed B4 You Board for Bethesda-based HMSHost, which operates restaurants in airports all over the country. B4 You Board allows users to order food delivered to their gate or place orders while in security to be picked up at the restaurant when they arrive. It’s already live in Chicago O’Hare International Airport as well as the international airports in Phoenix, Minneapolis-St. Paul, Minn., Sacramento, Calif., and Salt Lake City.

Miller, the CEO of Airside Mobile, and Tsao, the COO, met after the Sept. 11, 2001, attacks while helping on security issues for the government. After eight years of working at TSA, the duo decided that while their work was rewarding and gratifying, they were ready to move on.

“There’s stuff going on in airports that would make your skin crawl,” Miller added. “It’s a tough, draining place to work, but it’s awesome. You have so many chances to impact people’s lives.” 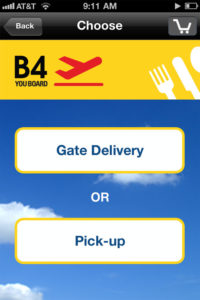 When the two were reaching the decision, they sat down at a table and, as Tsao tells it, wrote down ideas on what to do next on a piece of paper and passed it back and forth. They “kept coming back” to the mobile boarding pass they helped invent. So they launched Airside Express, a mobile boarding pass for Apple’s App Store and the Android Market that allowed users to sort through passes from five different airlines.

They moved temporarily to California to find developers and even took a meeting with Apple. The app launched, but the airlines, which included American, United and Delta, kept changing their boarding security procedures, making it impossible for such a small company to keep up. The app is now defunct, effectively killed off when Apple introduced their proprietary boarding pass app, Passbook.

“At any moment, it was like ‘we made it,'” Tsao said. “We’re up, and then we’re down. The highs in this business are dizzying, and the lows are depressing.”

The app flamed out, but Tsao and Miller kept plugging away. Because of its initial success, “folks within in the airport community liked the concept,” Miller said, which is how they linked up with HMSHost. B4 You Board will expand its footprint vastly across the country. “A hundred airports are in play,” Miller said.

They’re working on a Starbucks prototype that allows users to order their drink, customize it — with skim milk, an espresso extra shot, etc. — and have their phone’s GPS tell the baristas when to make it so it’s ready right when the user arrives.

Airside is also preparing to launch its biggest innovation yet: a mobile app that allows passengers to fill out customs forms on phones and tablets. Users will then have access to an express lane for going through U.S. Customs, a process that sometimes would otherwise take hours. 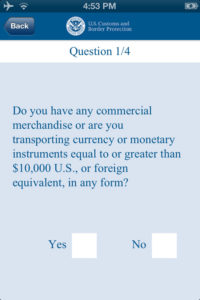 The product will be rolled out in the spring in “one of the biggest airports in the world,” but Airside Mobile can’t reveal where just yet.

“Two million people miss their connection every year just going through customs,” Miller said. “Delays from this cost the industry at least $1 billion a year.”

Because they worked for almost a decade together in the TSA, Miller and Tsao say they are uniquely positioned to develop an app like this, which requires considerable buy-in from government agencies.

“This is right in our wheelhouse,” Miller said. “We know people, so it was easier for us to make this happen.”

The pair had wanted to do something to improve the customs experience for years, and early in 2013 they finally figured out a way to do it. With the cuts from sequestration resulting in even longer customs lines at airports, Airside Mobile had its moment.

“[Sequestration] opened the door to us solving this problem,” Miller said. “We had already done a whole bunch of things to solve passenger pain with the TSA. After banging our head for three years, we got to the point where we could do this.”

The company has raised a total of $500,000 to support Miller, Tsao, and their four-man development team, which is now based in Austria, the home of Airside Mobile’s Chief Technology Officer. Though the distance might seem like a hindrance, Miller and Tsao say they’re able to collaborate effectively via Skype. Also, having the development team in Austria reduces the ever-present risk that a developer could be poached by another company.

This spring, Miller believes the company will start to grow exponentially, which means it can start turning bigger profits and Airside can hire more people: hopefully a dozen Arlington-based employees by the end of the year.

Miller said he’s been “daydreaming about a cool office space in Clarendon,” and looks forward to tapping into the “highest-educated county in the world.”

“We believe we’re onto something,” Miller said, “so a lot of this is gutting it out until we can say, ‘this works or it really doesn’t.'”