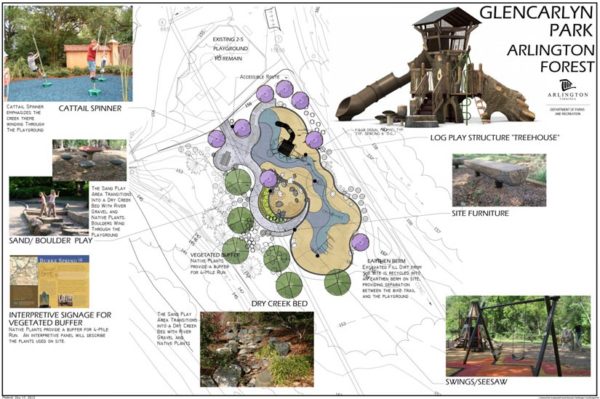 A new playground is coming to Glencarlyn Park, pending Arlington County Board approval on Saturday.

The playground, for children 5-12 years old, will complement an existing tot playground at the park for 2-5 year olds. It will feature a “treehouse” log play structure, a swing set, seesaw, a dry creek bed adjacent to a sand/boulder play area, benches, interpretive signage and cattail spinners.

The lowest construction bid for the project was $441,000, with a $44,000 contingency, for a total contract authorization of $485,000. County staff is recommending that the Board approve the contract, even though it’s considerably higher than expected.

Combining the construction contract with other expenses associated with the project, the total cost is expected to be well above half a million dollars.

“The original cost estimate for Glencarlyn Park of $485,000 has increased due to higher construction bids, bringing the total project cost to $579,255,” according to the staff report. “The additional amount of $94,175 can be funded from savings of other [Neighborhood Conservation] projects that were completed under budget.”

END_OF_DOCUMENT_TOKEN_TO_BE_REPLACED

More Stories
Arlington Property Values Up 5.8 PercentCar Flips on Roof on I-66 Near Rosslyn