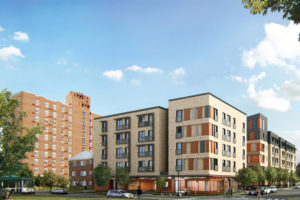 ‘The Springs,” a proposed five-story, 104-unit affordable housing building to replace the Carlyn Springs apartment complex, could be approved this Saturday by the Arlington County Board.

County planning staff is recommending the Board approve the site plan amendment, rezoning and General Land Use Plan amendment required to increase the housing density from 27 garden-style units on the site to a 104-unit mid-rise building.

The proposal, in the Buckingham neighborhood on the corner of N. Carlin Springs Road and Thomas Street, calls for two levels of underground parking with 110 total spaces and more than 5,000 square feet of office space, which will serve as the Arlington Partnership for Affordable Housing’s (APAH) new office.

“The proposed General Land Use plan amendment, rezoning and site plan follows the guidance in, and implements the vision of, the North Quincy Street Plan Addendum for this particular site and adheres to good urban design practice,” the staff report states. “The siting and design of the proposed apartment building is sensitive to the transitional nature of the site, and 71 net new committed affordable housing units are being created within walking distance to a Metro station.” 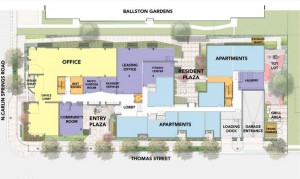 According to the staff report, the size of the building allows for a transition from the high-rises of Ballston to the north to the townhouses and small apartment buildings to the south. In addition, the proposal would widen the existing sidewalks on Carlin Springs Road and Thomas street from 4-5 feet wide to 13 feet wide on Carlin Springs and 11 feet wide on Thomas Street.

Of the 104 units, 98 are projected to be committed affordable housing, and 80 of those affordable units will be two- or three-bedroom apartments intended for families. The developer also agreed to negotiate a public access easement adjacent to the building intended for a future mid-block park.

The Buckingham Civic Association raised some opposition during community meetings, according to the staff report, claiming the redevelopment is inconsistent with the Buckingham Neighborhood Conservation Plan.