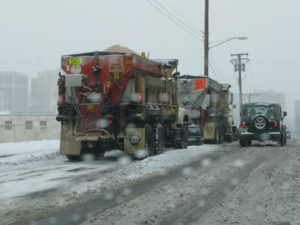 (Updated at 2:15 p.m.) It’s been more than 72 hours since the snow started falling on Tuesday and some small roads throughout the county still have ice and slush on them.

It’s a source of frustration for many residents, who have emailed and tweeted ARLnow.com about slippery back roads. It’s also a stark contrast for those who have lived in northern cities with more practiced snow-removal operations.

Why is Arlington, arguably the wealthiest county in America and a self-styled paragon of good government, seemingly overwhelmed by a few inches of snow when small workaday suburbs to the north can clear all of their streets with ease?

Is it lack of practice? Lack of resources? To try to figure that out, we took a look at another Arlington, an Arlington that doesn’t flinch when 4 inches of snow falls — Arlington, Massachusetts.

The county, with an average snowfall just over 15 inches a year, allocates $1.1 million per year for snow preparation and removal, according to county Dept. of Environmental Services spokeswoman Jennifer Heilman. It usually spends all $1.1 million, even the past two years when there was little accumulation at all.

According to Arlington, Mass., Town Manager Adam Chapdelaine, the town, which has averaged more than 58 inches of snow per season the past three years, allocates $724,000 per year for snow removal, with a $500,000 reserve in case more is needed, but the amount spent fluctuates depending on how snowy it is. According to the town’s visual budget tool, it spent $2 million on snow removal in 2011, $550,000 in 2012 and about $1 million in 2013.

Reagan National Airport recorded 3.8 inches of snow in total for the storm, according to Capital Weather Gang, which stopped before midnight Tuesday. Heilman said about 50 trucks were on the road — 40-45 county trucks and eight contractors — in three-and-a-half 12-hour shifts starting at 5:00 a.m. Tuesday until midnight on Wednesday. Hooking up plows to trucks started at 10:00 a.m. on Monday and road treatment began that afternoon. 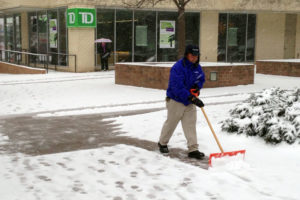 “Not all side streets will be plowed to bare pavement,” Heilman wrote in an email, “however we believe all have been plowed and treated to some extent. Sun and warmer temperatures are needed now to help get down to more bare pavement over the coming days. We will continue to respond to calls and online notifications of areas that can use more treatment or plowing as needed, but we have ceased full operations.”

The town has a full-time fleet of 12 large trucks called “snow fighters,” Chapdelaine said, and it has pickup trucks and other vehicles to which plows are attached. After more than 2 inches of snow accumulates, the town brings in outside contractors.

Chapdelaine outlined the town’s snow removal strategy, beginning with sanding and salting the roads before a drop of snow falls, sending out watch teams to assess snowfall and accumulation, and strategically placing the bigger trucks on the hilliest streets that are most difficult to navigate in the snow.

Chapdelaine says the town has seven different “operational levels” for snow, which allows it to clear large amounts of precipitation in a matter of hours, not days. Each operational level signifies different personnel and equipment, intended to efficiently scale the town’s response to each winter storm. In towns like Arlington, Mass., that includes clearing the back roads of snow before they are allowed to turn into ice and slush.

“All-in-all they do a pretty good job,” said Spencer Buell, a reporter for the Arlington Advocate, the town’s local newspaper of record. “We have a multiple-step plan, the idea being we can dispatch with the snow fairly quickly. It’s a topic of conversation every year… [250 lane miles] to clear and they can usually do it in about a day. The issue is where to put all the snow sometimes.”

Comparatively, Arlington County has four phases of snow removal that apply to every storm — alert, primary routes, residential streets and clean up — which means that after snow starts falling side streets have to wait to get treated. During a 5-6 inch storm Heilman said that side streets can accumulate up to an inch of ice, which plows are ineffective at removing, as traffic increases or temperatures dip.

In terms of sending kids to school on snow days, the county is much more cautious than the town.

Arlington Public Schools were closed due to the snow on Wednesday, after the snow had stopped the night before, and opened on a two-hour delay on Thursday. APS didn’t have to make a school cancellation decision on Tuesday because it was already a scheduled teacher work day, but all other schools in the area were closed. For a storm with 4-6 inches of accumulation, the Town of Arlington usually has school on time.

“Depending on the timing of it, we would probably have a delay or have school,” Chapdelaine told ARLnow.com. “If the storm is in the morning, maybe we would cancel school. I can’t imagine it would ever be more than a day. It really is situational. If [the snow is] going to start around noon, we’ll try to get the whole day in.”