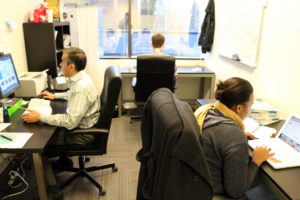 Vinay Bhargava has a master’s degree in electrical engineering, an MBA from MIT’s Sloan School of Management and seven years of experience working in negotiations and partnerships for Google. Today, Bhargava’s mission is to help teenagers figure out what college they want to go to.

That may sound like a fall from grace, but Bhargava’s startup, Mytonomy, is flourishing. The negotiator just inked a deal last month with the College Foundation of North Carolina, which is a national standard-bearer for preparing high school students for college, to provide services to every high school student in the state.

Mytonomy produces videos of recent high school and college alumni giving advice on different processes related to a student’s future, such as applying for college, writing the college essay and choosing a major. It’s called a “near-peer” advice model, allowing students to get counseling from those who have just been through the same process, as opposed to a guidance counselor or college guide book.

Bhargava, 43, got the idea from conversations with his friend and cofounder, Sean Burke, a guidance counselor at Thomas Jefferson High School for Science and Technology in Fairfax County. After two years in Google’s D.C. headquarters, Bjargava was ready to “focus on something with a social impact.” 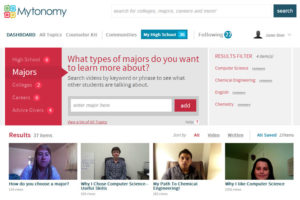 “We felt there was a lack of awareness among young people about what jobs are actually out there,” Bhargava said. “There was a need to explain what some of these abstract careers are… there is an information problem with young people in making decisions about their future.”

So, in 2011, he and Burke founded Mytonomy. They started with focus groups and pilot programs at Burke’s high school to find out exactly what students thought would be helpful to them. They settled on creating videos, which can be made by alumni, counselors, teachers or, for college students and young professionals, young college graduates at the next step on a particularly career path.

Near-peer mentoring and “inter-generational advising” became the vehicle for Mytonomy’s products. Bhargava said LinkedIn was part of his inspiration; high school students can’t really use LinkedIn because they have no contacts, he said.

“What about high school kids?” Bhargava asked from Mytonomy’s space in Rosslyn’s UberOffices. “They don’t know anyone, but they have the greatest need. We wanted to create an advising platform that reaches kids today.”

That starts with teachers and counselors, who are the primary contributors to Mytonomy’s current pilot client: Arlington Public Schools. For the 2013-2014 school year, Mytonomy and APS have partnered to try to get Arlington high school students to engage and learn about their future.

APS Supervisor of Counseling Marcia Jackson has been working with Mytonomy during the pilot program, and said if it’s successful, she “would advocate for us to continue the service if the budget permits.” 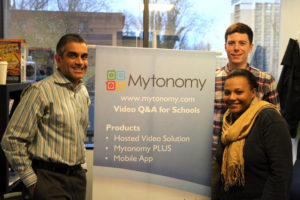 “When Mytonomy approached us and were interested in working with us, it was like, this is great because they offer counselors the opportunity to be 24 hours, around the clock for a student or family,” Jackson said, “because they can create the video with whatever content they want, and the student can watch it whenever is convenient for them. It really revolutionized counseling and the way we do business.”

The program hasn’t quite gained traction in the high schools, Jackson said, but that’s partly because of how busy the first semester is among counseling staff.

“Counselors are excited about it and they’re looking to use it this spring now that the beginning of the year craziness has calmed down,” she said.

Mytonomy has a four-person team — Bhargava, two full-time employees and Burke — based in the U.S. and a four-man technology team in New Delhi, India, that Bhargava manages remotely. Mytonomy has received funding from the New Schools Venture Fund and Kapor Capital, although Bhargava couldn’t disclose the amount. New Schools was the company’s first, and biggest, donor after it operated for 18 months on Bhargava’s savings and friends and family contributions.

Although Mytonomy’s growth can be easily measured in clients and funding, it has all seemed rather slow to the former Google employee, who says he knows he’s “impatient” about the pace at which a typical startup grows. That’s especially true because Mytonomy is an informational, not transactional, business, Bhargava says.

“We are a planning tool, there’s no transaction at the end,” he said. “The average teenager, it’s not the thing they want to focus on. Part of what will make it successful is to integrate it into the classroom. We’d like to have counselors and teachers make private videos, but the counselors have got to step up.”

Despite those challenges, and despite the difficulties of measuring success in the “EdTech” space — the most successful clients stop using the app when they’ve made a decision, so a loyal customer isn’t necessarily a good thing — Bhargava still has his eye on big growth.

“We have to spread the word and attract more customers,” he said. “We need to do more of this, and faster.”