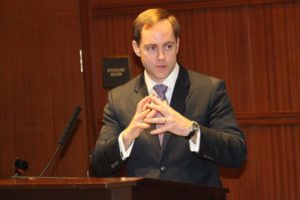 Alan Howze has captured the Democratic nomination for the upcoming Arlington County Board special election.

“Tonight I am honored to earn the confidence of Arlington Democrats and win the Democratic nomination for the Arlington County Board,” Howze said in a statement.

Howze will now face independent candidate John Vihstadt and libertarian Evan Bernick in the special election, which is being held to replace the retiring Chris Zimmerman. The date for the election has not yet been set, but it is expected to take place in early April.

The Arlington County Democratic Committee issued the press release about the caucus results.

Alan Howze, long-time community leader with experience in government and business, has been nominated as the Democratic candidate for the April Special Election to fill the Arlington County Board seat vacated by the resignation of Chris Zimmerman.

For the first time, ACDC used “instant run-off voting” to ensure that the winning candidate was the preference of a majority of voters. Instead of voting for a single candidate, voters were given the opportunity to rank candidates in order of preference. However, IRV was not needed as Mr. Howze received a majority of the first preference votes. The vast majority of caucus voters used the IRV system and voted for more than one candidate.

Alan Howze was born in Arlington, and he and his wife Pam and three young children live in the Highland Park-Overlee Knolls neighborhood. He has a strong history of civic work in Arlington, and currently serves as the President of the Highland Park-Overlee Knolls Civic Association, Vice-Chair of the Fiscal Affairs Advisory Commission (FAAC), and a Board Member of the Alliance for Housing Solutions. A graduate of James Madison University with an MBA from the University of Virginia’s Darden School of Business, Alan is a management consultant at IBM where he has worked with federal, state and local government leaders on a variety of strategy and transformation initiatives to reduce costs and improve the delivery of government services. For more information: http://www.alanhowze.com

Democratic Nominee Alan Howze stated: “Tonight I am honored to earn the confidence of Arlington Democrats and win the Democratic nomination for the Arlington County Board.” Howze added, “I want to thank Peter Fallon and Cord Thomas for running campaigns that highlighted important issues in our community. Peter has a long record of public service in Arlington. Cord has developed businesses in our community and can play a meaningful role in our Party. I look forward to working closely with Peter and Cord and their supporters, both to win the special election in April and to govern effectively as a Board member.”

Arlington County Democratic Committee Chairman [Kip Malinosky] stated: “Arlington Democrats are thrilled to rally around Alan Howze. He has an outstanding record of service to our community and a vision for a greater Arlington. We know how important it is to have our Democratic values represented at all levels of our government.

The date of the Special Election will be set by the Circuit Court; most likely it will be on Tuesday, April 8, 2014.