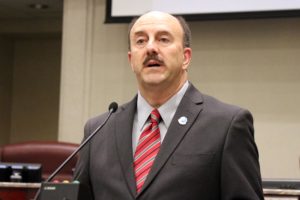 Zimmerman handed in his letter of resignation in advance on Jan. 1, according to County Board Clerk Hope Halleck. At the County Board’s meeting two weeks ago, Zimmerman was the last to speak and gave a 10-minute farewell address (beginning at the 3:16:31 mark).

The main theme of Zimmerman’s speech was striking a balance between listening and leadership:

It is expected that the citizenry will be actively engaged throughout the decision-making process. That is the meaning of the Arlington Way. A board member must always be seeking input from the people of this community. That advice and counsel is no less important than the recommendations of the manager and the professional staff, which must also be carefully understood and taken into account. This is the listening part.

But listening does not mean taking a poll. It does not mean reacting to every stream of controversy fomented on listservs, in emails and on blogs before coming to a decision. In the end, each board member has to make a judgment about what is best for the community.

Leadership is the unflinching exercise of that judgment without regard to momentary swings in popularity. I believe that the great success Arlington has had is the result of the combination of leaders who actively engage the people; listen closely to what they’re saying; and then chart a path that they, in their best judgment, believe is most likely to result in the ultimate happiness of the community; and the willingness of the people in this community to let them do so.

The Board will now operate with four members until a special election is held to fill Zimmerman’s seat, which is expected to be held April 8. Running for his seat are Democrat Alan Howze, who won the party’s primary last weekend, Republican-endorsed independent John Vihstadt, Libertarian Evan Bernick, Independent Green candidate Janet Murphy and independent Stephen Holbrook.

Zimmerman announced he was resigning the day after Election Day last fall. His last Board meeting was 18 years to the week after his first. He will now join Smart Growth America as vice president of economic development.

“I will bring all of the lessons I have learned to the effort to help other communities across this country succeed in building a more sustainable, prosperous and more equitable future,” he said to conclude his speech, “and I will continue to be a proud Arlingtonian.”