The crew at Virginia Eagle Distributors packed a bunch of us beer buyers onto buses this past Monday and very kindly drove us out to visit a couple of the Virginia craft breweries they represent. The point of our trip was to visit Devils Backbone in Lexington, which I’d never visited but had been wanting to for some time. 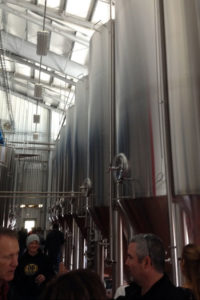 Devils Backbone is experiencing amazing growth right now, and has been handling its success smartly. 2014 will see many new packaged beers from Devils Backbone, many of which have been available on draft at the brewery and around the area for some time, and include many Great American Beer Festival medal winners.

Pear Lager will soon join Vienna Lager, Schwartz Bier, and Eight Point IPA as the fourth year-round Devils Backbone six-pack, and I couldn’t be happier to see it. At 4.4 percent ABV, Pear Lager is easy to throw back with intense pear flavor that never feels like a sugar bomb.

Gold Leaf Lager is finally being packaged in 2014; the three-time GABF medalist (bronze in 2013, gold in 2009 and 2010) will become Devils Backbone’s year-round canned six-pack offering. I found Gold Leaf crisp, satisfying, and worthy of the accolades it has been receiving over the past few years. Along with Gold Leaf, Devils Backbone with roll out seasonal canned six-packs; the first of these we’ll be seeing is Reilly’s Irish Red, which features a roastier malt character than most beers of its style, while remaining at a easy-drinking if not sessionable 5.5 percent ABV. 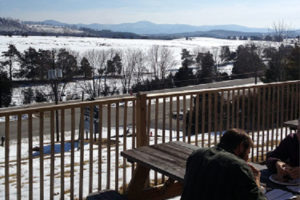 The crew at Devils Backbone put out the full welcome mat for everybody; a three-piece Bluegrass band played on as folks milled about, sampling beer and meeting up. The food was excellent, too, in particular the ample amount of pulled pork available for everyone. Those looking for a moment away from it all at the Outpost should grab some food and a beer and head outside to the Bier Garden; the porch offers a chance at a quiet moment along with a particularly nice view of the Blue Ridge Mountains. Devils Backbone has been garnering a lot of attention the past few years; 2014 is the year they start to leverage that in a big way, to the benefit of all of us beer lovers out there. 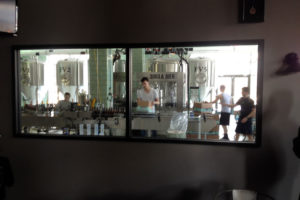 On our way to Devils Backbone, the group I was with made a stop in Harrisonburg to visit the gang at Three Brothers Brewing. Three Brothers only opened in December of 2012, with six-packs of their Hoptimization IPA and The Great Outdoors Pale Ale arriving in our part of the Commonwealth this past summer, but they’ve already built a loyal and growing fanbase at Arrowine. Working out of a small space that was formerly a Coca-Cola bottling facility, the Shifflett brothers (yes, there are three of them; yes, they’re brothers; yes, they all kinda look alike) are making some of the best beer in Virginia, with a consistency of quality that I can’t remember ever seeing in such a young brewery. 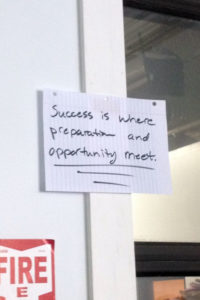 I was happy to finally try their Elementary Porter, whose malts imparts great dark fruit and roasty flavors, but it was some of their barrel-aged and experimental beers that blew me away. Resolute Imperial Stout was amazing as it was a couple months ago when we got a short run of its first batch; no 13 percent ABV bourbon barrel aged Stout should be so balanced, lacking the unpleasant astringent heat so many carry — but I’m happy this one is.

A quick tour of Three Brothers revealed both slow, smart growth and lots of ambitious moves almost unheard of for a brewery barely out of its first year. The automated bottling line you see in the picture gallery below is a recent (and welcome) addition, and new tanks scheduled to arrive in late spring/early summer will increase production of their most widely-distributed beers.

At the same time, their barrel program is being built up in a very big way. Sourcing barrels from great distilleries as well as from some of the best Virginia wineries, Three Brothers is refining what will become a steady line of limited, thoughtfully-crafted Belgian-style Ales, while also continuing to produce the Resolute. After sampling a few of these, I am very excited for the future of Three Brothers Brewing. 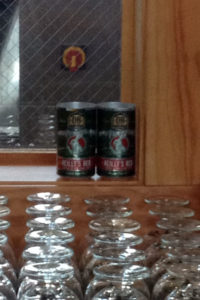 Savage Blonde caught my eye first; a 10.3 percent Belgian-style Blonde aged in rum barrels for eight months along with a healthy addition of Brettanomyces, Savage Blonde’s floral wild yeast flavors and the sweet, spicy rum barrel influence find a happy balance. The Rum Barrel Aged Belgian Dubbel, a 2013 GABF bronze medal winner, isn’t what I’d call subtle or complex, but it’s incredibly tasty and a lot of fun, with every component shining through.

Perhaps Three Brothers’ most ambitious project to date is Experiment #3, which isn’t even done yet but the Shifflett brothers allowed us to try. Experiment #3 is a 100 percent Brettanomyces fermented Ale; most Brett beers have the wild yeast added after primary fermentation, but this one is wild all the way through. It’s not the easiest technique in the beer world, but can produce fascinating results (try some of Ommegang’s Wild At Heart or Allagash’s Golden Brett or Tiarna) and this is no exception. It is expected to end up in the 9.5 percent ABV range, but it felt like it was approaching that already with its richness of mouthfeel.

I had to ask Adam Shifflett if #3 was based off of some kind of Imperial Belgian-style Wit recipe, because I was getting so much spice influence that made me think of Witbier (coriander, cardamom, etc.). Turns out, all that spiciness was coming from the Brett; #3 is at its core a fairly straightforward Belgian-style Blonde.

I came away from my day-trip almost more impressed by Three Brothers than by Devils Backbone, solely based off of how much the Shifflett brothers are accomplishing and trying to build with the space they have. Overall though, I’m more excited by the state of Virginia beer as a whole: Devils Backbone is well on its way to deserved national recognition, and as Three Brothers continues to succeed its production will only increase as its experimental beers find their voice.

These are only two of the amazing breweries working in our state, and if you’re a beer fan it’s well worth your time to try to visit as many as you can. Virginia’s beer industry is what everyone wants its wine industry to be — full of world-class product made in-state at breweries nearly every Virginian can access, from suburbs to the countryside. If Virginia’s breweries continue their rapid ascent, they’re going to eclipse the wine side for sure. Virginia craft beer is for real, guys and gals — drink up and be proud.

No “What I’ve Been Drinking This Week” because you’ve pretty much just read it all. Until next time!