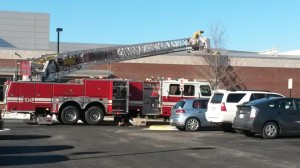 The fire broke out just before 9:00 a.m. Saturday in an HVAC unit on the roof of the school. Firefighters from several jurisdictions responded and helped to extinguish the blaze. The HVAC system was damaged and water from the firefighting effort flooded into the school’s band room, below.

“There was just water damage to the band room,” said Arlington Public Schools spokesman Frank Bellavia. “Crews were able to dry the carpet over the weekend.”

“The fire has not impacted any classes or extracurricular activities at the school,” Bellavia said.