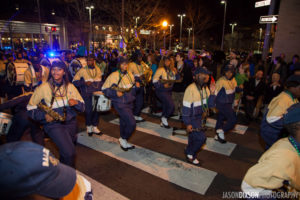 Update on 3/3/14 — The parade has been postponed indefinitely due to snow.

According to Matt Hussman, executive director of the Clarendon Alliance, the parade this year will be the biggest ever in terms of entries. Among the groups that are expected to march in the parade:

Before the parade, at 5:00 p.m., New Orleans native chef David Guas, of Bayou Bakery (1515 N. Courthouse Road), will hold his annual Bayou Gras Block Party in front of the restaurant in Courthouse.

The event will feature Abita on draft, bourbon cocktails, oysters, king cake, jambalaya, and gumbo under a large party tent. Tickets range from $15-30.