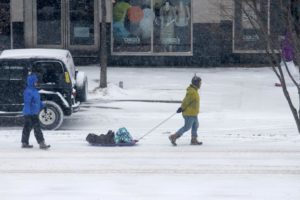 (Updated at 3:35 p.m.) The snow has largely stopped falling but crews in Arlington will be busy clearing it from roads and sidewalks well into Tuesday.

About 4-6 inches of snow fell in Arlington, barely meeting the low end of the National Weather Service’s forecast. But the snowfall still managed to cause plenty of problems around town.

The local Virginia State Police barracks reported a total of 111 crashes, 84 disabled vehicles and 372 calls for service as of 3:00 p.m. That’s on top of numerous accidents reported on local Arlington County streets.

ART and Metro bus service has been suspended for the day, but is expected to resume tomorrow. Trash collection service was also canceled in Arlington today. Flights resumed at Reagan National Airport around 3:00 p.m., after arrivals and departures had been suspended for most of the day due to snow-covered runways. Some 360 flights were canceled at the airport today. 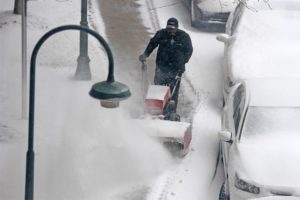 Snow removal crews in Arlington are currently in a “Phase 2 Alert” — clearing only primary and arterial roads. Contract snow crews are expected to start using dump trucks to clear snow from Arlington’s Metro corridors starting at 6:00 p.m. tonight. Arlington Parks and Recreation crews, meanwhile, are clearing the sidewalks in front of county facilities.

Arlington’s emergency winter homeless shelter in Courthouse is open all day today due to the snow.

The snow has claimed at least one major event casualty. The Clarendon Alliance has postponed its annual Mardi Gras parade, which was scheduled for Tuesday evening.

“The Clarendon Alliance is announcing that the 2014 Mardi Gras Parade is being postponed, due to snow and ice along the parade route,” Clarendon Alliance executive director Matt Hussman said in an email. “We intend to reschedule the parade as soon as possible — possibly around St. Patrick’s Day… but we need to consult with County officials before we can announce the new date.”