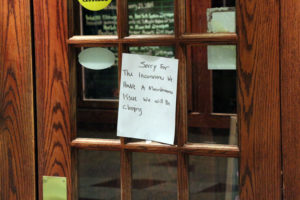 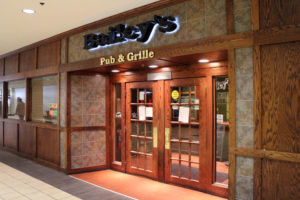 (Updated at 1:55 p.m.) The Bailey’s Pub and Grille in Ballston Common Mall at the corner of Wilson Blvd and N. Randolph Street has closed, but it may not be gone for long.

A Bailey’s employee who was cleaning out the space told ARLnow.com that the restaurant is “under contract” to take over the former Union Jack’s space along N. Glebe Road, but couldn’t say for sure that the move was imminent. ARLnow.com reported the move was possible in December.

Two of the mall interior doors at Bailey’s have signs saying Bailey’s closed due to “a maintenance issue.” It’s unclear if the restaurant will actually reopen in the new space.