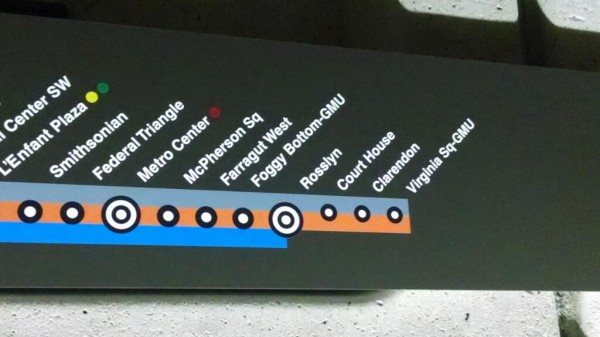 Some erroneous new signage in the Virginia Square Metro station would have one believe that George Mason University is greatly expanding its local presence beyond Arlington and Fairfax County.

The sign correctly labels the station it’s in as “Virginia Sq-GMU” — but then labels the first Orange/Blue Line station in the District of Columbia as “Foggy Bottom-GMU.” Flip the M upside down and you get the correct abbreviation for the institution of higher education in Foggy Bottom, George Washington University.

The error was pointed out this afternoon in a Twitter post that was retweeted by the tireless, anonymous WMATA critic Unsuck DC Metro. “Unsuck” subsequently opined: “If Metro can’t even get signs right, what’s going on with the tracks, trains and other safety gear?”