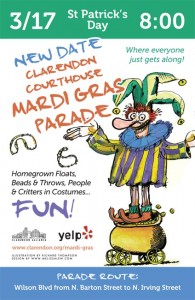 (Updated at 11:35 a.m.) The annual Clarendon Mardi Gras parade, which was postponed this past Tuesday due to snow, will now be held on St. Patrick’s Day.

The parade has been rescheduled for 8:00 p.m. on Monday, March 17. It will still run along Wilson Blvd from N. Barton Street to N. Irving Street in Clarendon.

“Approximately 90% of the original Mardi Gras entries are able to participate on the rescheduled date,” according to the Clarendon Alliance, the parade’s organizer. “The Mardi Gras Parade registration period is being extended, to allow additional entrants to participate in the parade. New registrations will be accepted by the CA through 5pm on Wednesday March 12.”

In 2010, when snow forced the cancellation of the Mardi Gras parade, it was transformed into a St. Patrick’s Day parade, complete with Irish dancers, a leprechaun and green beads. For now, the 2014 version is still being called a “Mardi Gras parade.”