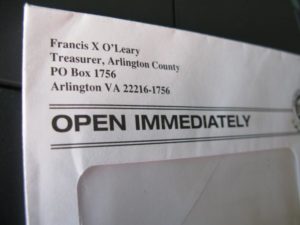 County staff is projecting that Arlington will collect $20.8 million more in taxes than originally budgeted for, led by a $23.4 million increase in real estate tax revenue. Another bright spot an additional $3 million from personal property taxes.  The increases are due to higher-than-expected real estate assessments and strong new car sales and used car values, according to Donnellan.

Some county revenue is lower than expected, however. Sales taxes are projected to be down $2.6 million, hotel taxes are down $2.1 million, fines are down $2 million and cigarette and communication taxes are both down $300,000.

Donnellan’s memo to the County Board blames the federal government shutdown for the lower sales and hotel tax revenue. The decrease in fines is largely due to “parking ticket revenue declines.”

Given additional savings found in county expenditures, Arlington estimates it has an additional $27.6 million available. Of that, $9.6 million will be transferred to Arlington Public Schools, $12.3 million is to be used as one-time funding in Donnellan’s proposed FY 2015 budget, and $5.7 million is unallocated.

Public hearings on the new county budget are scheduled for March 25 and 27. The new fiscal year starts July 1.