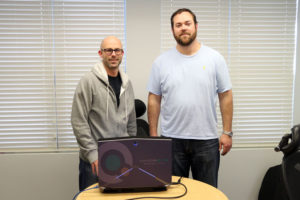 Bob Krantz, Elliot Nierman and David Shedd worked for years for a legal services company, finding information in troves and troves of documents for law firms and corporations preparing them for litigation. Like many startup founders, they were working long hours, doing tedious work and thinking, “there has got to be a better way.”

That’s why the three left their jobs and founded Mindseye in 2008 as a next-generation tool for eDiscovery, giving law firms and corporations the ability to save heaps of time scouring electronic files for documents.

“eDiscovery refers to the preservation, collection and analysis of relevant information for litigation,” Chief Strategy Officer Jeff Fehrman said. “People get careless with email. They let their guard down. But finding what’s really relevant is like finding a needle in a haystack.”

Krantz and his co-founders bootstrapped the company, and they remain self-funded. Because Mindseye didn’t have investors, proving the technology worked was a struggle at first, but the trade-off was well worth it.

“Giving up say is not always the most attractive way to change an industry the way we were trying to,” Krantz said in his office along Columbia Pike. “We knew what we wanted to do and the biggest potential for creating an impact.”

Before they left their jobs, they offered their company — which is now called Integreon — the chance to develop the software. Integreon declined and, in 2009 when Mindseye launched Tunnel Vision, its flagship product, Integreon became Mindseye’s first client.

Krantz admitted that most companies that launched, self-funded, in 2008 have probably bitten the dust by now, especially those with business plans that required big companies to spend money on new products.

However, in the current era, every bit of new technology has added a multitude of new levels of data. That fact, paired with the Edward Snowden leaking scandal, has made big companies — and big law firms — highly aware of the power of sifting through data efficiently.

“The Snowden thing really helped us in driving the point home,” Krantz said. “With our technology, you could see who you speak with, when you talk and what you’re talking about without any keyword search. We don’t look through individual emails or correspondences, we’re trying to find patterns.” 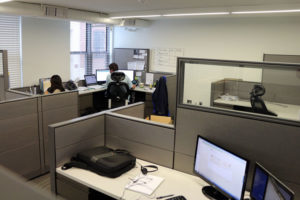 Although Mindseye would seem applicable as a vehicle for government contracting, the economies of scale, Krantz said, keep them to working just with law firms and private companies. Mindseye currently has almost 20 employees and more than 40 clients.

“Within its first year as a client, we saved a Fortune 50 company almost $1 million,” Fehrman said. “Anyone we’re selling to has a need for this technology. They have a lot of investigations, litigation or regulation. We basically try to understand the challenges each of them face.”

Despite starting the company working on different co-founders’ couches, Mindseye has consistently grown, and despite lofty ambitions, Krantz said they are laser-focused on staying true to their initial mission.

“The biggest challenge for us, and our biggest strength, is focus,” Krantz said. “You can see things out there that can open up new arenas for business. But when you lose focus on what you’re doing, you fall apart.”

While Mindseye is staying in its lane, Lehrman has big visions for how much that lane can widen in the next few years.

“In five years, if we’re not working with more Fortune 100 companies and government clients,” he said, “we’d be disappointed.”