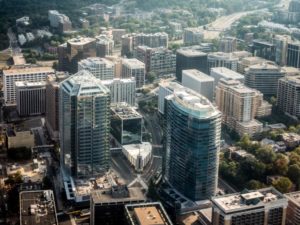 The County Board will hold public hearings next month on a framework for the future of Rosslyn.

The Rosslyn Sector Plan update — the product of the Realize Rosslyn community planning efforts over the past 15 months — is expected to be adopted by the end of this year, but before that the County Board must hold hearings and approve a framework for the plan. That’s expected to happen next month, after the Board voted to advertise the hearings at its meeting on Tuesday.

Among the biggest changes that could be coming in Rosslyn if the plan is approved is extending 18th Street N. as a pedestrian and bike corridor through Rosslyn’s main stretches — with intersections at Nash Street, Fort Myer Drive, Moore Street and Lynn Street before connecting with N. Arlington Ridge Road — making Fort Myer Drive and Lynn Street two-way roads and removing the tunnels underneath Wilson Blvd.

In addition, the plan will call for utilizing ground floor space for uses other than retail in areas where it would be difficult for stores or restaurants to survive; revitalizing Freedom Park and implementing “active recreational opportunities” in Gateway Park; and increasing housing density in central Rosslyn.

The Realize Rosslyn panel, made up of residents, property owners and government officials, has a stated goal giving Rosslyn a “vibrant 18/7 street life.” 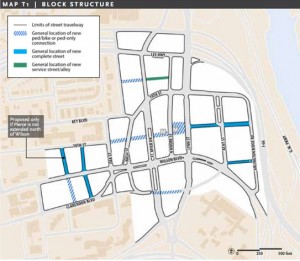 The proposed 18th Street N. corridor was one of the issues that generated a rift between property owners, specifically the owners of the Ames Center (1820 N. Fort Myer Drive) and Monday Properties, which owns several buildings in Rosslyn including the new, vacant 1812 N. Moore Street skyscraper.

The owners of the Ames Center, in a letter from land use attorney Tad Lunger, said Monday Properties is trying to unduly influence certain aspects of Realize Rosslyn. Lunger said the Ames Center, which houses the Art Institute, is planning on redeveloping into two buildings on either side of the planned 18th Street extension in a straight line from the current 18th Street. Monday Properties’ site plan for the redevelopment of 1401 Wilson Blvd and 1400 Key Blvd moves that alignment to the north, Lunger said.

“We are concerned that Monday Properties’ site plan application will preempt the planned alignment of 18th Street before the Rosslyn sector plan update is ever adopted,” Lunger wrote. “The Realize Rosslyn process should guide the Monday Properties site plan, not the other way around.”

Monday Properties President and COO Tim Helmig fired back at Lunger, calling the claims “accusations,” but saying “I will not comment at this time on the specific suggestions and objections in the Lunger Letter.”

“I believe it is without basis to insinuate that Monday Properties role [sic] on the Process Panel has perpetuated a conflicting proposal,” Helmig wrote in a letter to the County Board. “The efforts of Monday Properties as an applicant are in stark contrast to the unfair characterizations within the Lunger Letter.”