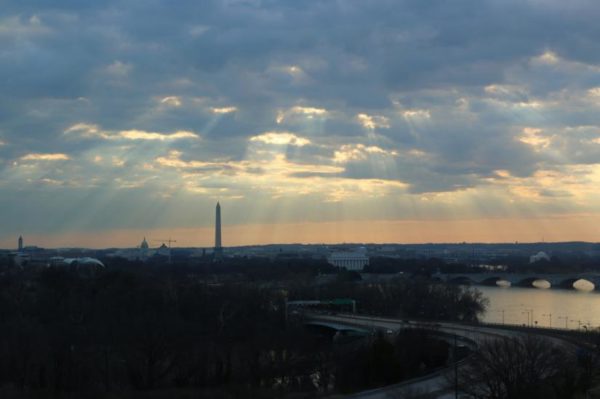 H-B Parents Peeved By Document Disappearance — Some parents of H-B Woodlawn students are up in arms after three documents that questioned a proposal to move the secondary program to a new building disappeared from an Arlington Public Schools website. One parent called the removal of the documents “heavy-handed and disturbing.” [Falls Church News-Press]

Arlington Man Charged With Fairfax Sex Assault — Sloan Wilson Rappoport, a 44-year-old Arlington resident and former George W. Bush administration official, has been charged with sexually assaulting a woman he met at a Bailey’s Crossroads clothing store. Police say Rappoport invited the woman into his Mercedes-Benz, then drove to a nearby location and sexually assaulted her. [Washington Post]

Airline Changes at DCA — As a result of changes related to the American Airlines/US Airways merger, JetBlue, Virgin America and Southwest Airlines will all be expanding their presence at Reagan National Airport. [MWAA]

Endorsements for Howze, Vihstadt — Arlington County Board candidates Alan Howze (D) and John Vihstadt (I) have picked up notable endorsements in the past week. Howze has been endorsed by the Sierra Club, which says he has a “depth of knowledge and understanding of key environmental issues facing the County.” Vihstadt has been endorsed by the local firefighters union, which says it shares Vihstadt’s spending priorities — an emphasis on core services and opposition to projects like the streetcar and the aquatics center.

Will Arlington Regret HOT Lanes Opposition? — Writing about what may be the area’s “worst commute” — from Fredericksburg to the District via I-95 and I-395 — highway historian Earl Swift suggests that Arlington may ultimately regret its opposition to HOT lanes on I-395. Running HOT lanes from I-95 to just before Arlington on I-395 “could spawn new and fearsome jams on I-395, choking Arlington County with the exhaust of idling legions of cars,” Swift writes. “The HOT lanes could be so popular, and inspire so fierce a public demand for their extension to the Potomac, that talks between state and county resume.” [Atlantic Cities, Washington Post]