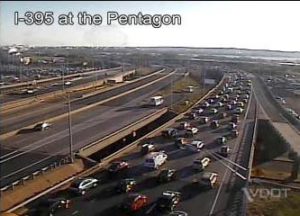 (Updated at 10:35 a.m.) Arlington County has emerged victorious from its $1.5 million legal battle with the state over the plan to build High Occupancy Toll lanes on I-395.

Virginia Transportation Secretary Sean Connaughton announced today that the state is no longer pursuing its I-395 HOT lanes plan, which the county blocked by filing suit in 2009. VDOT is also canceling plans to upgrade the Shirlington and Eads Street interchanges.

Zimmerman questioned the wisdom of handing the state’s existing HOV lanes over to a foreign company for decades while getting what he described as relatively little in return. Zimmerman argued that the I-395 HOT lanes plan was poorly-designed, could exacerbate traffic congestion and could cause “great harm to the people that we and you represent in Northern Virginia.”

Addressing the lawsuit’s critics, Zimmerman wrote that “carrying on overheated diatribes through the news media is not conductive to conciliation.” He disputed the oft-repeated charge regarding the lawsuit’s insistence that minority populations would be adversely affected by HOT lanes, saying that “Arlington has never called anyone racist.”

Per the charge that Arlington was acting unscrupulously by suing two government officials in their personal capacity, Zimmerman noted that the officials “are of course provided legal representation through government general liability coverage.”

Even though Arlington’s HOT lanes fight is likely coming to a close, the lawsuit may continue to cost the county in the form of ill will in Richmond. As we previously reported, one Fairfax County lawmaker has effectively killed a bill that would renew Arlington’s hotel tax surcharge, which provides about $1 million per year for tourism promotion. Del. Tim Hugo (R) cited the costly HOT lanes suit as evidence that Arlington didn’t need the extra tax revenues.