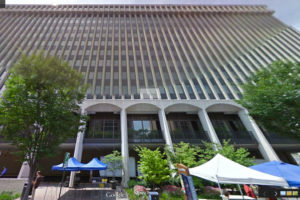 Crystal City will soon be home to Arlington’s largest mural.

The Crystal City Business Improvement District has commissioned a 215-foot-long, 2,500-square-foot mural to be painted on the Crystal Drive side of the vacant office building at 1851 S. Bell Street.

The “graffiti-style” mural will be painted by the No Kings Collective beginning April 1. According to Crystal City BID President Angela Fox, several artists will paint different parts of the mural during the times when the streets of Crystal City are busiest — during the work day, farmer’s markets, food truck Thursdays and 5K Fridays.

“It’ll just turn into a very vibrant wall like you’ll see in Miami’s Wynwood Art district,” Fox told ARLnow.com. “It’s colorful, it’s bright, it’s experiential. You’re going to watch the evolution of it going from a primed white to all sorts of colors.”

The painting process will take about three-to-four weeks, Fox said, and the mural could be continuously changing until the building is ultimately torn down, to be replaced with a 730,000-square-foot skyscraper.