The gleaming 24-story office building, complete with a unique cantilevered roof, would replace what is now an older government office building that’s nearly vacant as a result of the Base Realignment and Closure Act (BRAC). Under the proposal currently under initial consideration, the existing building — 1851 S. Bell Street — would be torn down and the new building would be built and relabeled 1900 Crystal Drive.

At some 730,000 square feet, we’re told that 1900 Crystal Drive would be the largest private office building in Arlington County. Developer Vornado is hoping to achieve LEED Silver or Gold environmental certification for the building. 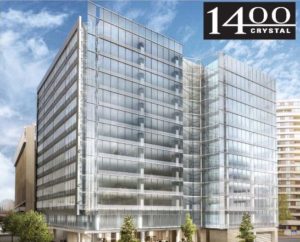 “We’re really excited that such a gorgeous building is [being proposed],” said Crystal City Business Improvement District President and CEO Angela Fox. “It’s a bold statement about where Crystal City is headed.”

Up the road, changes are in the works for another existing office building along Crystal Drive.

The building known as Jefferson Plaza One, which has also been affected by BRAC, is expected to be renovated starting this spring.

The building will be “re-skinned” with a largely glass exterior and will be relabeled 1400 Crystal Drive. Building owner Lowe Enterprises has scheduled a groundbreaking event for the project on March 29.

Read more →
More Stories
Photos: The Dog Days of WinterWestover Beer Garden Closed, But Will Return With Music in April