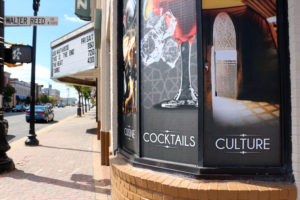 Mazagan, the Moroccan lounge and hookah bar being built next to the Arlington Cinema & Drafthouse, is expected to open within the next couple of weeks.

Chef/owner Riyad Bouizar said he’s hoping to open the business April 15, but after a long, drawn-out construction and licensing process, the opening could be delayed even further. Bouizar signed the lease for the space in August and was hoping to open in December or January.

For the first month, Mazagan will only be open for dinner and late night, Bouizar said, after which it will start selling lunch. During the week, the bar and hookah lounge will be open until 1:00 a.m., and until 2:00 a.m. on Fridays and Saturdays.

“This is something new to the neighborhood,” he said. “With the movie theater right next door it’s a chance for people to get a drink afterwards.”

The private hookah lounge, Bouizar said, will be a glass enclosure in the dining room. That way hookah smokers won’t feel like they are cut off from the rest of the patrons, but the non-smokers won’t have any secondhand smoke.