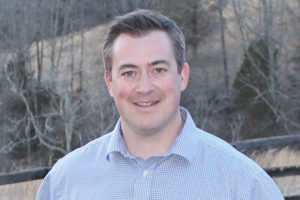 Dennis Bartow, 39, announced yesterday that he will be vying for the retiring Moran’s seat, facing Micah Edmond in a Republican convention, set for April 26 at Bishop O’Connell High School. Bartow, a U.S. Army veteran and founder of two companies, lives in Alexandria with his wife and son.

Bartow announced his candidacy in a press release, in which he says he served in the military in Iraq, Kuwait and Kosovo. He also founded Bartow Imports, which distributes wine to 10 states, and a federal government contractor. He is running on a platform of economic development and “smaller, smarter government.”

“The neighborhoods and communities that make up Virginia’s 8th District stand at a crossroads today in how we are governed,” Bartow said in the release. “I’m running for Congress because Americans are tired of the gridlock and pessimism. I believe we can work together to create policies that will spur job growth and prosperity again – so that every American has the opportunity to share in our great nation’s promise. I will reinvigorate the district and our nation with the business experience and entrepreneurship that helped me launch two successful businesses and create jobs.”

The filing deadline for the election was March 27. The field for the primary includes 11 Democrats — Adam Ebbin, Alfonso Lopez, Patrick Hope, Bill Euille, Charniele Herring, Bruce Shuttleworth, Lavern Chatman, Don Beyer, Mark Levine, Satish Korpe and Derek Hyra. Nancy Najarian, who had announced she was running in March, only secured 549 signatures of the required 1,000 to qualify for election, according to the 8th Congressional District Democrats’ website.

The Democratic Primary will be held June 10. The 8th District has been a Democratic stronghold for decades, with local and national Democratic candidates consistently winning more than 60 percent of votes.