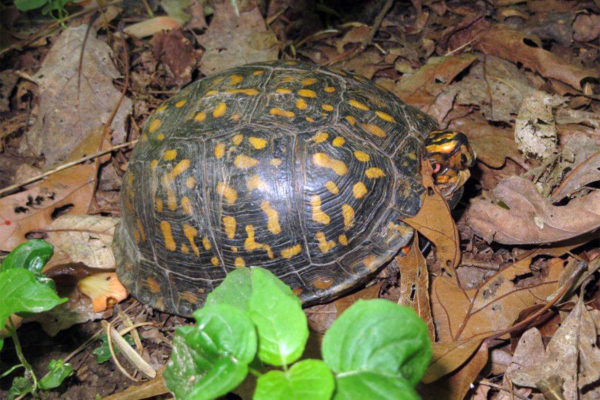 As the weather has warmed up, Arlington’s box turtle population is coming out of hibernation and making its way onto roads and lawns. That has led county naturalists to ask for the community’s help in helping to protect the shelled reptiles.

“A box turtle’s shell can protect it from many dangers in nature, but danger from humans is another story,” Fairweather wrote. “Roads and traffic pose a particularly difficult challenge; even the box turtle’s portable fort is no match for a sedan. They are also vulnerable to lawn mowers; if you have box turtles in your neighborhood, check for them in your lawn before you mow. Sick and injured turtles can find help at the Long Branch Nature Center but we need your help to provide that care.”

Park Naturalist Rachel Tolman says there is no estimate on how many box turtles that live in Arlington, but said they are most common in meadows, parks and lawns, especially those that border forests.

“It’s difficult to get a good estimate for how many we have,” Tolman told ARLnow.com. “They are just hard to find. You can’t catch them on a game camera or bait for them. I’ve released a box turtle and have turned around five minutes later and couldn’t find it anymore.”

Tolman said the nature center rehabilitates about 40 injured turtles a year that residents bring in. To raise money for those efforts, the county’s Department of Parks and Recreation organizes an annual Turtle Trot 5K. This year, the race is on May 17 at 10:00 a.m. at Bluemont Park. The race is $30 for adults and $15 for children ages 12 and under.