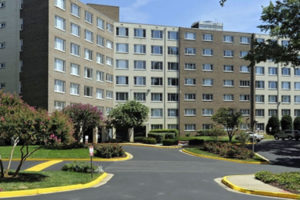 The Arlington County Board approved a $16.5 million loan to affordable housing developer AHC on Saturday to purchase a Columbia Pike apartment building.

The loan, which comes from the county’s dedicated Affordable Housing Investment Fund, will allow AHC to purchase the Serrano Apartments at 5535 Columbia Pike, which are currently owned by Carmel Partners.

The apartment building, in the Columbia Heights West neighborhood, has 280 units, 239 of which are currently considered affordable. The loan allows AHC to purchase the building and keep 196 units in the building as dedicated affordable housing for the next 60 years. The remainder will be offered at a market rate.

AHC will also purchase the 39,500 square feet of vacant land fronting the Pike, which Carmel has an application to subdivide, according to the county’s press release. That land could be developed into a complex with about 80 apartment units, according to the Columbia Pike Form Based Code.

“The County Board has committed to preserving affordable housing along Columbia Pike,” County Board Chair Jay Fisette said in the press release. “This loan to AHC is in keeping with our commitment. These units now will remain affordable for generations of Arlingtonians — and help preserve the Pike’s rich diversity as it is redeveloped into a more transit-oriented, walkable ‘Main Street.'”

Current tenants will not be displaced with the ownership change, the county said. The purchase follows through on the Columbia Pike Neighborhoods Area Plan, which calls for keeping 6,200 of the current affordable market-rate apartments affordable as the Pike develops and creating 400 new units affordable to families at 80 percent of the area median income on the western portion of the Pike.