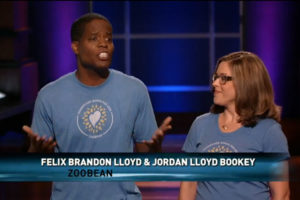 Felix Brandon Lloyd and Jordan Lloyd Bookey founded their company, Zoobean, as a Pandora-like service for curating and delivering children’s books personalized to each child’s needs. Six weeks later, they were invited to go on the ABC investment reality show Shark Tank.

Their episode aired Friday night (watch it online here), but the company today is vastly different from the one they sold in front of the five sharks when the episode was filmed last July. Back then, the company was simply a curation engine for children’s books, where parents could subscribe and get delivered a book every month based on their preferences.

Since then, Zoobean has grown into a more powerful tool, creating complex recommendations for books and expanding into recommending early childhood education smartphone apps. Despite the early stage of their company when they presented it to the Shark Tank investors, Lloyd and Bookey were able to get Dallas Mavericks owner and dot-com billionaire Mark Cuban to invest $250,000 for a 25 percent stake in the company. 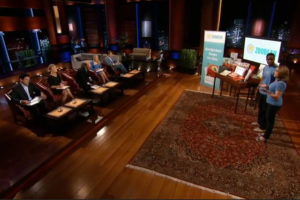 “It’s the same thing about Netflix,” Cuban told his fellow “sharks,” who passed on the company, saying it wasn’t unique enough to compete with Google or Amazon. “Netflix, at the beginning, had a recommendation engine and it started with nothing. This has to build too. This is a very binary business. It’s either a home run or it’s a strikeout. If they hit it, it’s enormous.”

The company’s recent transformation came largely based on Cuban’s input, Lloyd told ARLnow.com from their office space in Rosslyn’s ÜberOffices.

“A lot of what he said in the last episode, taking it beyond books and the platform being interesting,” Lloyd said, “we immediately began moving in that direction by curating apps and making it available as a list service. All of that was fueled by the Shark Tank experience. [Cuban] had a lot of input in how to price it and market.”

In the months since, Zoobean has completed its round of $980,000 in investment, and Cuban’s stake has settled in at about 16 percent, while Zoobean’s “Chief Dad and Chief Mom” retain a controlling majority stake in their company. 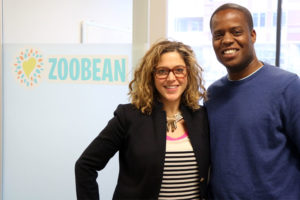 The couple started their careers as teachers. Lloyd was the Washington, D.C., Teacher of the Year in 2000-2001 when he was a middle school social studies teacher at The Seed School before leaving education to found a company called Money Island in 2006, which was purchased in 2010. Bookey was a teacher before getting her M.B.A. from Wharton Business School, then became the head of K-12 education for Google.

They got the idea for their company when they wanted a book for their 2-year-old son that explained what it was like to be a big brother, since the parents were expecting their second child.

Zoobean uses data to recommend books and apps that fit each child; “Pandora for books,” as Lloyd calls it. But the products are pre-selected by a group of 15 curators — mostly librarians and educators — who write recommendations and blurbs explaining why each book or app is worth purchasing or downloading.

“Apps are like the wild west,” Bookey said. “There are no publishing houses saying if something’s good or not.” 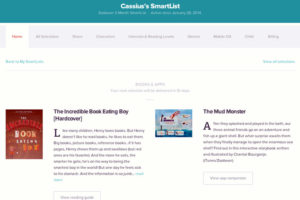 Lloyd told the sharks he wants to “change the world” with Zoobean. He knew as a confessed “huge fan” of the show before he ever went on that they wouldn’t be sympathetic to the mission, but that didn’t matter to Lloyd. He has his eyes on the “third grade cliff.”

“Around age 8 or 9, some kids fall drastically behind,” he said. “By age 3, some kids have heard 30 million words less than their peers. That’s partially an awareness issue. People don’t know where or when to start because there’s so much information. That’s why we send out a weekly newsletter with articles for parents and include tips at the bottom of the SmartList.”

The SmartList is each parent’s guide to the books pre-selected for their children. This can be done by ethnicity, family structure, or child personality types, like “not-so-pink girls.” They plan to continue to expand their focus and reach beyond early childhood literacy, but that is their primary focus for now and the near future.

The company launched on a Monday last May, with $500,000 in seed funding. On Thursday of their launch week, they got the email from Shark Tank.

Walking through the doors of the Shark Tank room — even though it’s on a sound stage in Los Angeles — “was real. I was nauseous and forgetting what I had prepared,” Bookey said. Despite the nerves, they got the reaction they needed from one of the country’s most famous investors.

“I think trusted curation is the future,” Cuban told the Zoobean team on the show. “The value in this has nothing to do with books. It has everything to do with helping grandma find something that she doesn’t know how to get. The question is, what’s after books?”