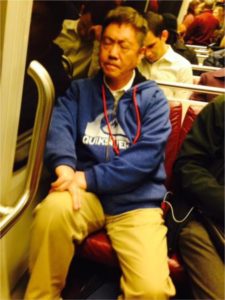 Metro Transit Police are asking for the public’s help in identifying an Orange Line rider (pictured, left) who they say touched a woman inappropriately.

During the Feb. 12 evening rush hour commute, while on an Orange Line train near the Ballston Metro station, the man “allegedly rubbed the inner thigh of a patron as she sat next to him,” according to police. The crime is being described as “assault and battery.”