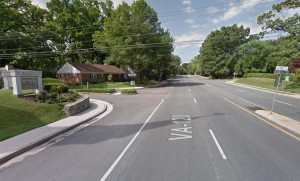 The collision happened around 7:40 p.m. near the intersection of N. Glebe Road and Old Glebe Road. Though the circumstances of the accident are unclear, both cyclists involved were injured and transported to the hospital, according to Arlington County Fire Department spokeswoman Lt. Sarah Marchegiani.

Both cyclists were described as adult males. One was transported to Virginia Hospital Center in “stable” condition.

The other suffered what was initially described as a “serious head injury.” Marchegiani would only say that he suffered a “serious traumatic injury” and was transported to a local trauma center.

Though a connection could not be immediately confirmed, the intersection is on the route for the popular Freshbikes Tuesday Night Ride Series, which kicked off for the season last night at 7:00 p.m.