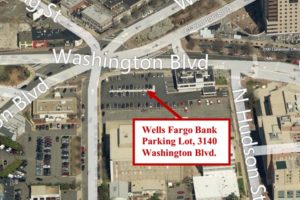 (Updated at 5:50 p.m.) The region’s first outdoor night market could be coming to Clarendon later this month.

The Arlington County Board is scheduled to consider a use permit for two new biweekly markets at its Saturday meeting. The outdoor markets would be held on alternating Saturdays and Sundays in the parking lot of the Wells Fargo Bank at 3140 Washington Blvd, a block and a half from the Clarendon Metro station.

Organized by the Clarendon Alliance, one of the biweekly markets will be called the Spark Market. It’s described as a “juried art market” for artists and designers. The market is being managed by Jessica Blaszczak, who ran the former Ballston Arts Market, and will be open on Sundays from 11:00 a.m. to 5:00 p.m. starting June 8, should the use permit be approved.

The second of the markets — which hopes to launch on Saturday, May 31 — will be called the Clarendon Night Market. Open, at least initially, from 3:00 to 9:00 p.m., the market could be the first of its kind in the D.C. area.

“We’re pretty sure this is the first night market in the region,” market organizer Michael Berman told ARLnow.com today. “We’re really looking forward to coming to the Clarendon area. We think it’s a pretty dynamic intersection right there and… we’ve been looking at night markets for awhile.”

The market will have lights to add illumination and ambiance after dark. Berman, whose management firm also runs the well-known Eastern Market flea market, expects to sign up vendors who will sell a mix of jewelry, photography, paintings, handmade crafts, collectibles, vintage items and furniture.

Also expected at the market, in keeping with the gastronomic focus of many Asian night markets: specialty food vendors selling take-home food like hand-baked pies, and perhaps grab-and-go food from local restaurants.

Not in the offing, even though it seems a natural fit: food trucks. Berman says he doesn’t want to drive away business from Clarendon restaurants. 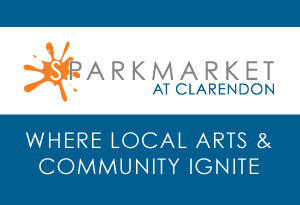 The Clarendon Alliance plans a local marketing blitz to get the word out about the markets once the use permit is approved.

“We think it’s going to be cool,” Clarendon Alliance Executive Director Matt Hussman said. “It’s hard to start a brand new market, so it might be a bit slow to start, but we’re doing out best.”

The permit being considered by the Board would allow the markets to run from April to December. Should the markets prove popular, however, the Alliance may seek approval to operate the market year-round. Likewise, Hussman said, if the night market is successful organizers may seek permission to end a bit later than 9:00 p.m.