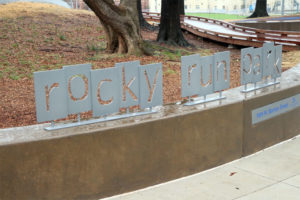 New restrooms will be built at the newly-renovated Rocky Run Park (1109 N. Barton Street) near Courthouse.

The Arlington County Board on Saturday approved a contract for construction of a new restroom facility with two unisex bathrooms, along with pavement around the building and a new stairway to N. Barton Street. The contract for the project is in the amount of $373,200 ($410,520 with the built-in contingency.)

The restroom project is part of the second phase of improvements to the park, approved as part of the Neighborhood Conservation process in the fall of 2012. Phase 2 of the project will also include the construction of a small storage facility to be used for Arlington Dept. of Parks and Recreation camps, plus new benches and trashcans.