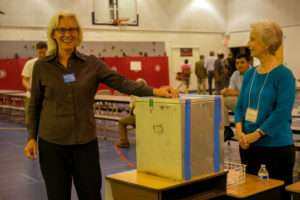 (Updated at 2:30 p.m.) Barbara Kanninen won the Democratic endorsement for the Arlington School Board this weekend, a narrow victory in the caucus over Nancy Van Doren and Greg Greeley.

Kanninen, who narrowly lost to School Board member James Lander in last year’s Democratic endorsement caucus, defeated Nancy Van Doren by a similar margin this year, with 1,812 votes to Van Doren’s 1,794. Before an instant runoff was conducted, and Greeley’s votes were distributed to voters’ “second choice” candidates, the margin was a bit wider: Kanninen received 1,549 votes, Van Doren 1,329 and Greeley received 839.

Kanninen campaigned for reduced standardized testing among Arlington Public Schools students and said she was “uncomfortable” when Arlington was announced as the top-spending school system in the state. She also said that one way to solve APS’ growing capacity issue was flexible spending during a debate among the three candidates last month.

Kanninen, an economist and children’s book author, said through working on advisory boards for both the School Board and County Board over the years, as well as with children in Arlington and D.C., she has the experience needed to be a productive Board member.

“Our schools are important to all of us, whether we are parents, teachers, homeowners, or citizens who want to live in a community that values education,” she wrote in her candidate essay for ARLnow.com this month. “Collectively, we have the energy, the brains, and the will to do great things for our kids and our community.”

Kanninen told ARLnow.com in an email Monday afternoon that she enjoyed “the many lively and informative discussions” she’s had with the community during what she called “a vigorous campaign that highlighted Arlingtonians’ deep commitment to making our schools the best they can be.”

Van Doren announced after the caucus results were counted that she would be throwing her support behind Kanninen for the general election in November, for which Kanninen now becomes the odds-on favorite. She will run to fill the seat left vacant by retiring School Board member Sally Baird.

“I wholeheartedly support Barbara in the upcoming general election as she faces the challenges in our school system,” Van Doren said in a press release. “Our community needs to work together to face the challenge of continuing to improve educational outcomes while working with the county to find space for our growing student population.”

Greeley, in an email to ARLnow.com, also congratulated Kanninen, saying the campaign was a chance to have “a great discussion about the future of our schools.”

“Barbara ran a strong campaign,” Greeley wrote. “She had the experience and organization from her campaign last year. Last year’s campaign also provided a degree of name recognition that ultimately proved decisive this year. I look forward to working with her to address the important issues our school system faces, most notably our looming capacity crisis.”