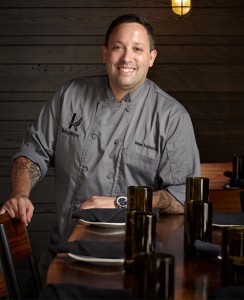 Isabella, who is preparing for the planned fall opening of his Kapnos Taverna restaurant at 4000 Wilson Blvd in Ballston, announced today that he will be opening “Pepita,” a 1,200 square foot Mexican restaurant, in the same building. Pepita is expected to open in “early 2015.”

“I love Mexican food and cocktails, and Pepita is going to be the type of casual neighborhood restaurant and bar I would visit often,” Isabella said in a press release.

“It’s going to feel like you’re on vacation at a Mexican coastal resort between the wood finishes, greenery, fresh produce for cocktails and dishes, and windows that open onto a small patio,” he continued. “Everything from the food to the drinks to the design is going to be traditional, familiar and comfortable.”

Isabella is the chef and owner of three restaurants in the District — Italian-inspired Graffiato, Greek-inspired Kapnos and “G,” a sandwich shop — in addition to a sandwich concept called G Grab and Go in Edison, N.J. Last summer he cut ties with Bandolero, a Mexican restaurant in Georgetown that he managed under contract.

More about Pepita, from the press release:

The menu will feature just a dozen items, including daily specials from a caja china-roasted suckling pig. A selection of tacos, house-made salsas and guacamole, ceviche, salads, soups and tortas will be available for lunch and dinner seven days a week, with brunch on weekends. Food and drink specials will rotate all day, and the entire menu will be priced by the piece.

A robust beverage program will be at the heart of the restaurant’s menu and feature a large selection of tequila and mezcal and a list of rocks and frozen margaritas made to order with fresh fruit. A build-your-own option will encourage guests to select from a list of juices squeezed that day to create custom margaritas. Pepita will also serve hot and frozen Mexican coffees, which can be enhanced with a shot of tequila. Taha Ismail, beverage director for Graffiato, Kapnos and G, and a partner in the project, is the mastermind behind Pepita’s beverage program.

The design is inspired by Mexican coastal cantinas and highlights light wood furniture with a motif of yellow, light green and marigold tiled patterns. A concrete bar will serve tacos and drinks to a dining room of around 40 seats, all at high top tables. Additional seating will be available on a covered patio, which will have direct access to the bar via open service windows.